Stoke striker Wilfried Bony ended his drought with a brace to haunt former club Swansea in a 3-1 victory.

The 27-year-old had gone without a goal since St Stephen's Day, 310 days ago, but the Manchester City loanee kickstarted his career in Staffordshire with his team's first and third goals.

To compound the Swans' misery, both were laid on by Joe Allen, who was heavily linked with a return to South Wales before Stoke swooped this summer, and the Potters' other strike, which arrived after Wayne Routledge's equaliser, came via an Alfie Mawson own goal.

It leaves American boss Bob Bradley with one point from his opening three top-flight fixtures, while Stoke were able to record a third straight triumph after a stuttering start themselves.

Their manager Mark Hughes had hoped a fixture against Bony's old team would see the Ivorian's barren run end given he had found the net in each of his two previous games against the Swans, and in the third minute the familiar feeling was back. 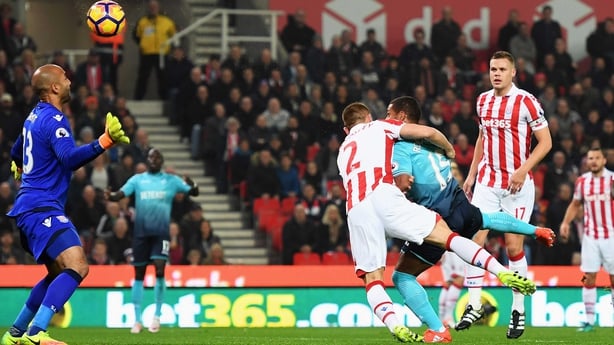 Xherdan Shaqiri's near-post corner was nodded into the air by Neil Taylor and Allen reached it, knocking into the six-yard box with his left foot to leave Bony the simplest of finishes to get off the mark.

Swansea looked like unravelling as Charlie Adam's attempt was blocked by Mawson and Ryan Shawcross nodded at Lukasz Fabianski from a corner cheaply given away by Mike van der Hoorn.

Bradley would have settled for a period of stabilisation, instead he saw an equaliser from the visitors' first attack.

The recalled Fernando Llorente held the ball up for Gylfi Sigurdsson and he lifted a cross into Routledge, who managed to outmanoeuvre Phil Bardsley to nod in an eighth-minute leveller.

A breathless start did not peter out and the frame of Fabianski's goal was struck three times before the break.

Adam struck either post with left-footed attempts before Marko Arnautovic was frustrated by the woodwork after collecting Allen's pass and shifting to the side of Fabianski, with a narrowing angle working against the Austrian as he fired against the post.

However, Swansea were far from the under the cosh and Routledge's second of the campaign would have arrived with a half-volley had Grant not pawed it behind.

Bony almost followed up his early first-half goal with another at the start of the second period when he skied a great opportunity presented to him by Arnautovic. 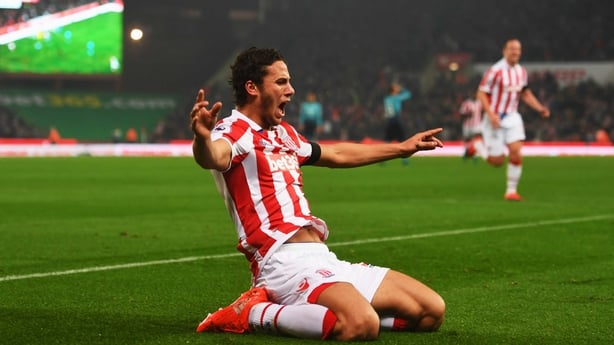 Stoke would take the lead again not long after, although it came via a Swans player.

Republic of Ireland midfielder Glenn Whelan's terrific pass was latched upon by substitute Ramadan Sobhi [above] and he jinked beyond Angel Rangel before firing towards the far post, with Mawson's intervention only diverting it past Fabianski.

A third Stoke goal arrived 17 minutes from time as the Allen-and-Bony connection worked again. The Welsh international had the first bite of the cherry but fired into Fabianski and when the ball came back to him he flicked to Bony to head home.

Swansea still showed some fight as Borja Baston's deflected effort clipped the top of the crossbar and they felt aggrieved when Routledge was denied a penalty.

Referee Michael Oliver motioned towards the spot as he was pulled down by Erik Pieters but, after consultation with his assistant, he gave a free-kick outside the area, with replays showing contact occurred in the box.

Bradley must feel as though everything is going against his team, and their fans were left wondering where his relegation-threatened side would be were Bony and Allen back on their books.