Juan Mata says Manchester United need to stay strong if they are to bounce back from the Chelsea humiliation and win Wednesday's derby against Manchester City.

Sunday saw a six-match unbeaten run in all competitions come to a comprehensive end as Jose Mourinho, many of the United coaching staff and Mata endured a nightmare afternoon at their old stomping ground.

Pedro's goal after 30 seconds threw the visitors off kilter at Stamford Bridge, with Gary Cahill, Eden Hazard and N'Golo Kante all scoring as Chelsea handed out a chastening 4-0 defeat.

Mata, introduced at half-time, says the scoreline "hurts" but knows United can ill-afford to wallow in self-pity given Pep Guardiola's City arrive for a mouth-watering EFL Cup clash on Wednesday.

"Things got complicated since the first minute," he said.

"By conceding an early goal the game we had in mind changed completely, and from that moment we weren't able to come back.

"Chelsea had a much better start than us and we paid dearly for it. 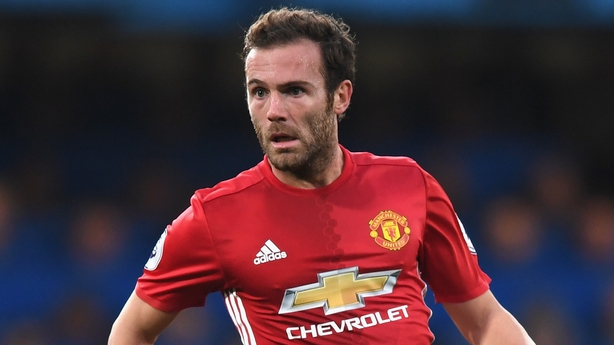 "Once they scored the second goal, we tried to control the game a bit more by keeping the ball in Chelsea's half of the pitch, but obviously they were feeling very comfortable in a compact defence, and every time we lost the ball they had an opportunity to initiate a dangerous counter-attack.

"We created some chances to score and get into the game, but I had the feeling that whenever we were close to doing that, we were punished with another goal.

"But we must carry on. Luckily, in three days we have a very important fixture, and as from now we must focus on this new opportunity to get better.

"It sounds like a cliche but it's true: when we win and everybody praises you it's easy to be united and celebrate together, but it is now, after such a defeat, when we must remain mentally strong and keep going.

"We must carry on. Luckily, in three days we have a very important fixture, and as from now we must focus on this new opportunity to get better."

Wednesday will be the second time Guardiola and Mourinho have faced one another since taking up residency in Manchester.

A swashbuckling display - despite a nervy debut for Claudio Bravo - saw City run out 2-1 victors at Old Trafford when the sides met last month, with the upcoming EFL Cup encounter offering both the chance to get things back on track.

Sunday's 1-1 draw at home to Southampton saw City extend their winless run to five games as an indomitable start to life under Guardiola came to an abrupt halt.

United's emotions are even more raw after the shellacking at Stamford Bridge, where Mata was taken aback by the vocal support that continued throughout a miserable afternoon.

"Thank you so much to the fans that came to London, you didn't stop cheering us on through the 90 minutes, even when things became so difficult, you guys are amazing," he wrote on his blog.

"And also to the Chelsea fans, for they always show me their respect and affection.

"We hope to give you the win that you deserve this coming Wednesday."