Shelbourne have issued a strong statement expressing the club's "disgust and disappointment" at their own fans after a protest against their move to Dalymount Park led to thrown flares and pitch damage.

Supporters aired their unhappiness at Shels' looming departure from Tolka Park during their final home league game of the season against Waterford United on Saturday night.

Flares were thrown on to the pitch and a banner appeared to be set alight during Shels' 1-0 defeat, with the club strongly condemning the scenes.

"Shelbourne FC would like to express its disgust and disappointment at the actions of those individuals who were involved in the unsavoury incidents which occurred in Tolka Park last Saturday evening," a club statement read.

"Peaceful protest is quite acceptable and it should be noted that club personnel did not intervene in the protest while it remained peaceful.

"However, what occurred on Saturday night placed our players, staff, supporters and, most importantly, our young supporters in danger, as well as causing great distress and upset to many of those young fans attending the game."

Shelbourne have come to an agreement with Dublin City Council to relocate to a redeveloped Dalymount Park as co-anchor tenants with Bohemians.

As part of this agreement, Shelbourne FC Ltd, the company which trades as Shelbourne Football Club, has surrendered its interest in Tolka Park to the council.

This decision led to Saturday night's protest, but the club - who also released the below image of the damage to the pitch - vowed to snuff out those responsible for the worst of the behaviour and punish their actions. 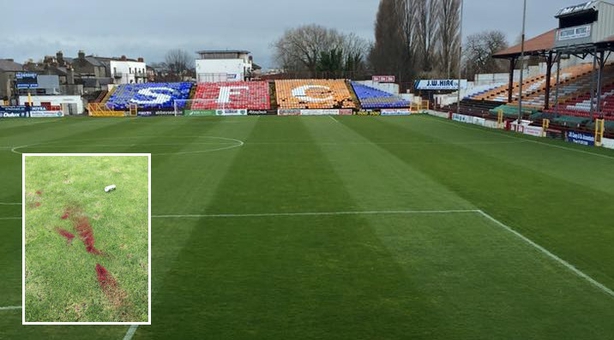 "We apologise to anyone who felt intimidated or threatened by the behaviour of the protesters," the statement went on.

"We would also like to commend our stewards and security staff, and the members of An Garda Síochána, who did their best to deal with a difficult situation.

"We are currently reviewing CCTV footage and an investigation into the events has commenced. In due course, we will take the necessary steps to ensure that this kind of incident will not be allowed to happen again.

"In the meantime, our ground maintenance staff has begun the work of repairing the damage to the stand and the playing surface at Tolka Park."