Dundalk's European conquerors Legia Warsaw were involved in more off-field trouble on Tuesday night, as fans clashed with Spanish police ahead of their Champions League meeting with Real Madrid.

The Polish outfit edged out the Lilywhites in the play-off stage for Europe's elite competition back in August, but they've endured a troubled campaign so far.

During their 6-0 home loss to Dortmund in September, there had been both crowd disturbances and incidents of racist behaviour, which led to UEFA ordering the next Champions League home fixture in Warsaw against Real on 2 November must be played behind closed doors.

They're bottom of Group F, having lost all three of their games, and the 5-1 hammering they suffered at the hands of Real Madrid last night has been compounded by more unsavoury scenes.

Before the match, there were clashes around Madrid between Legia supporters and Spanish police, with a section of 'Ultras' sparking violence which was shown across social media. 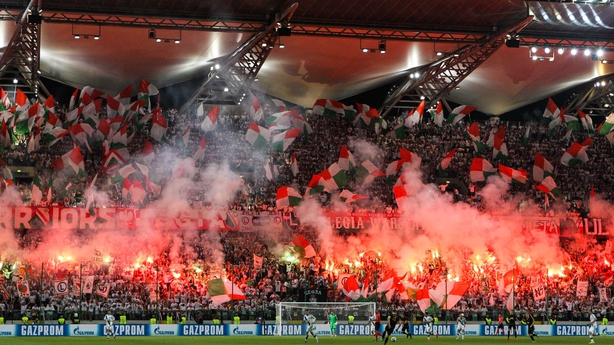 There were reports of seven people requiring medical treatment.

An increased police presence had been deployed in Madrid, with some 2,000 officers on the ground after the fixture was ruled high risk by the authorities.

Meanwhile, UEFA have opened disciplinary proceedings against FC Copenhagen after the Danish club's fans set off fireworks during their 1-0 Champions League defeat at Leicester.

European football's governing body has been cracking down on the use of fireworks, flares and smoke bombs by supporters, with Celtic, Liverpool and Manchester City among the clubs recently fined or warned for breaching regulations on pyrotechnics.

A statement posted on UEFA's official website said FC Copenhagen had been charged for "the setting off of fireworks - article 16 (2) of the UEFA disciplinary regulations" on Tuesday night.

UEFA's control, ethics and disciplinary body will hear the case on 17 November.