Dundalk kept up their march towards a third title on the trot as they comfortably beat Longford Town by 3-0 at City Calling Stadium - a result that sees the midlanders relegated from the Premier Division.

A win against Bohemians at Oriel Park on Sunday or St Patrick's Athletic's second defeat of Cork City in the space of five days this coming Friday, would confirm the Lilywhites' 12th League of Ireland crown.

Dundalk led at the break courtesy of strikes from Dane Massey and Dave McMillan while a fortuitous Daryl Horgan goal three minutes into the second half confirmed the away side's dominance.

As expected it was the cup finalists who were on top from the start. Both Massey and Brian Gartland's fired headers straight at Ryan Coulter inside the opening ten minutes. While Jamie Mulhall diverted Alan Keane's goalward drive from distance away from the target on 13.

Keane, deputising for the injured Sean Gannon, played his part in the opener on the quarter hour. He teed up Massey who with time and space, planted a sweetly struck shot into the corner of Coulter's net for his third league goal of the season.

Coulter was at full stretch to deny Dundalk their second just past the half hour. Don Cowan wastefully conceded possession to Dave McMillan on the left wing before the Dundalk striker pushed his way past two Town defenders to square for the loose Horgan. The winger's strike denied only by a strong hand from Coulter.

The champions elect were forced to withdraw injured winger John Mountney midway through the half. His replacement Darren Meenan combined with Keane on 33 but the former's placed effort flashed wide.

Playing for little more than pride, Alan Mathews' charges brought a first save from Gabriel Sava nine minutes from the break. Kealan Dillon's whipped effort from the edge of the box palmed to safety by the former Drogheda keeper.

The Oriel Park outfit, playing their first of five games in twelve days, struck for their second shortly before the break. 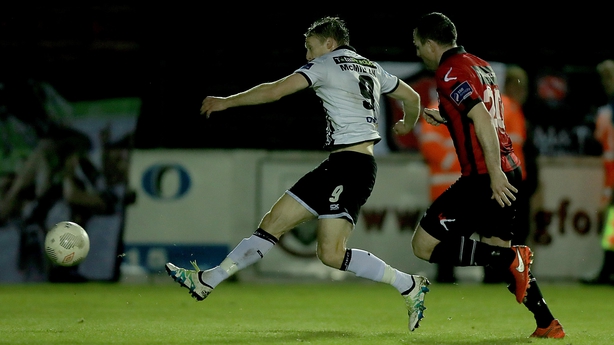 Receiving the ball from wide right, Finn showed great awareness to play the ball into the path of McMillan who picked his spot and blasted past Coulter from 15 yards for his 16th league strike of the year. The goal placed him level with Cork's Sean Maguire at the summit of the top scorer's list.

The second period was just three minutes old when the Louth men made it three. McMillan's wonderful spin brought him past a Longford challenge on the half way before he sprayed possession out wide towards Patrick McEleney.

The Derry native made his way inside before sending a ball to the front post where Conor Powell could only watch on as his attempted clearance inadvertently smashed off Horgan and into his own net.

Dundalk in the shop window? https://t.co/tC2khmnZol

Leading comfortably and with news of St Patrick's Athletic's win over Cork filtering through, Dundalk took their foot off the gas somewhat as they cruised to victory.

Substitute Robbie Benson might have done better with his effort on 75 when he attempted to square for a team mate despite being in a opportunistic position. While McMillan could only nod his headed effort from a Meenan cross on to the butt of Coulter's post on the next attack.