Not for the first time, Daryl Horgan was the difference as Dundalk took a massive step towards the SSE Airtricity League Premier Division with a 2-1 win over Cork City at Oriel Park.

Dundalk’s majestic winger has been outstanding this season and he produced on the big stage yet again, and in front of Republic of Ireland manager, Martin O’Neill, to propel Dundalk four points clear of the Leesiders with just five games to play.

If the opening goal after just seven minutes carried a bit of luck, his 25-yard free-kick going in off the back of Cork City goalkeeper, Mark McNulty, the second was pure genius, a solo run that ended with a finish to match.

Cork pulled one back through substitute Mark O’Sullivan but they never really launched an onslaught and Dundalk saw it out to take a huge step towards their third league title on the trot.

All eyes were on the team sheets before the game and Dundalk manager, Stephen Kenny, reacted to Saturday’s shock 3-0 defeat to Sligo Rovers by wielding the axe with Sean Gannon and Chris Shields relegated to the bench. 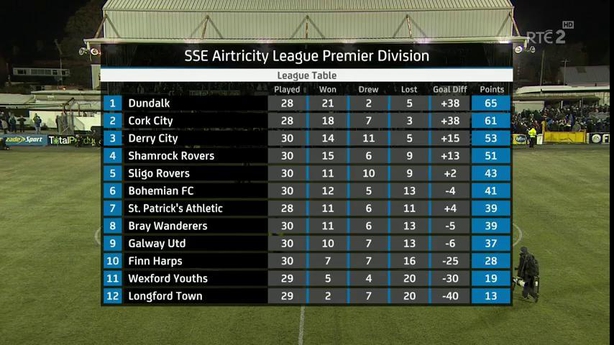 Patrick McEleney was passed fit, while Alan Keane came in for his first League of Ireland match since 30 October, 2015.

The biggest news, however, was the omission of Gary Rogers, the veteran goalkeeper paying the price for a couple of high profile mistakes over the past couple of weeks. Gabriel Sava came in for his first league start in almost a year.

There were no surprises in John Caulfield’s line-up.

The visitors cut the gap to just one point with a five goal drubbing of Galway United on Saturday night and they named an unchanged team with the league’s top scorer, Sean Maguire, leading the line against his old club.

Left-back Kevin O’Connor made his third start in the space of just five days after appearing for the Irish U21s against Serbia just 24 hours before the rout of Galway.

It took just five and a half minutes for the game to come to life. 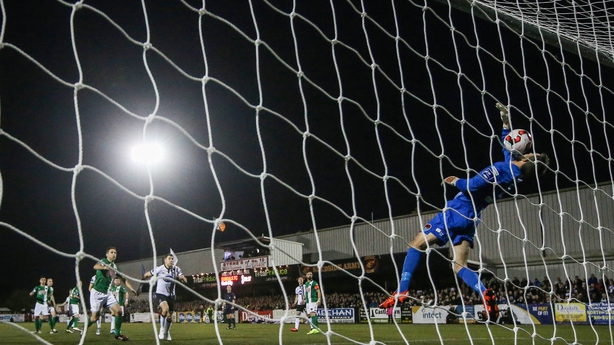 Referee Tom Connolly harshly decided that Alan Bennett had upended McEleney in full flight and Horgan punished his old club, lifting a free-kick over the wall to see it bounce off the crossbar and hit the net via the unfortunate McNulty’s back.

Cork responded well to the goal, dictating possession for large periods but it was the champions who looked a real threat when they went forward.

Keane acquitted himself very well throughout and he broke forward just past the quarter hour mark to make room for cross. His delivery picked out David McMillan, who nipped in front of Bennett, but McNulty was equal to the effort.

Bennett was let off the hook by the officials in the 17th minute when McMillan attempted to hook McEleney’s floated centre back across the penalty area. The ball hit the underside of Bennett’s outstretched arm but Dundalk’s appeals for a penalty were waved away.

Caulfield's side enjoyed a decent spell after that, zipping the ball about nicely in the middle third but, with Andy Boyle and Brian Gartland outstanding, Maguire was starved of service.

The Waterford man’s only real involvement came when he was picked out nicely by Gavan Holohan on the inside left but he opted to play the ball across goal rather than shoot, even though the angle looked against him.

Gartland, Garry Buckley and Stephen O’Donnell all made their way into the notebook as the temperature began to rise but it was Horgan who almost lifted the old ground into orbit in the 36th minute. 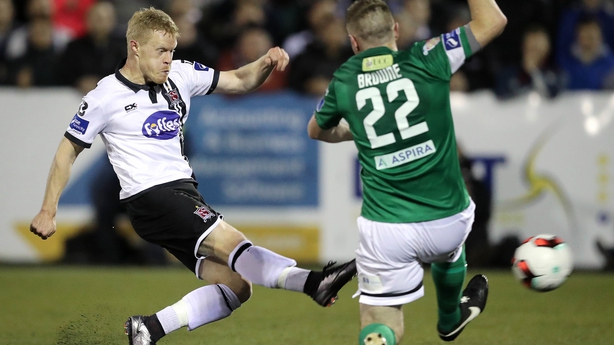 Picking the ball up about 30-yards from his own goal, he skipped away from Bolger, drove with intent at the Cork back four and fired a stunning drive past McNulty.

The pace didn’t let up in the second-half as both sides went toe to toe again.

Sava did well to get out of his area quickly to clear a Buckley through ball that was intended for Maguire after just two minutes of the restart.

Horgan then had another chance to test McNulty three minutes later but his free-kick flew well over the top of the City crossbar.

Caulfield introduced O’Sullivan for Holohan in the 54th minute and the move had the desired effect as the visitors hauled themselves back in the game less than two minutes later.

Bolger spread the play to the right flank and even though O’Sullivan missed the subsequent delivery with his first attempt, he reacted before Gartland to prod home with his second with the aid of a big deflection off Boyle. 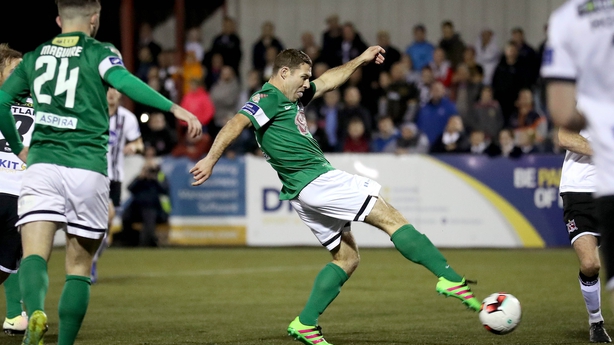 Bolger was extremely lucky to stay on the pitch 10 minutes later, the Cork City skipper hacking down substitute Chris Shields as he made his way towards the penalty area. The referee, though, amazingly opted to keep the yellow card in his pocket.

Dundalk looked the more likely to add to their tally and Bolger did brilliantly to stop Finn pulling the trigger after a well worked move on the left involving O’Donnell and Horgan. Kevin O’Connor did just enough to pressure Mountney to fire wide with the loose ball.

Five minutes of additional time were added but Cork never really looked like getting an equaliser and the final whistle sparked scenes of wild celebration at the end.

Dundalk are close, so close they can almost feel it.