Sligo Rovers produced one of the results of the season at Oriel Park, running out 3-0 winners to put a huge dent in Dundalk’s title hopes.

A mistake by Lilywhites goalkeeper Gary Rogers gifted Achille Campion a goal after just 47 seconds and the champions never recovered with substitute, Phil Roberts, giving the visitors a 2-0 lead before the break before Raffaele Cretaro put the cap on Dundalk’s biggest league defeat under Stephen Kenny with a fine solo effort on the hour.

While Dundalk were crashing to defeat, Cork City ran riot against Galway United at Eamonn Deacy Park and The Leesiders’ 5-0 win means that they will arrive at Oriel Park on Tuesday night just one point behind Dundalk and with a better goal difference.

Supporters were still filtering through the turnstiles when Dave Robertson’s side took a shock lead.

Rogers completely missed Brian Gartland’s pass back and although he got back to claw the ball away before it could cross the line, Campion followed up to slam the ball home and claim his first goal since the end of August.

Dundalk almost equalised straight from the restart but Ronan Finn guided an effort just the wrong side of Ciaran Nugent’s post.

A Darren Meenan cross was then flicked into Finn’s path by Stephen O’Donnell but his effort was deflected wide of the target. From the subsequent corner, Dane Massey rose to head just over the top.

David McMillan’s through ball cut the Bit o’Red backline open to set Finn in on goal in the 10th minute but Nugent advanced to get the slightest of touches and divert the ball just wide of the post.

Sligo went close to adding to their lead when Mick Leahy headed just off target and they did just that in the 37th minute when Phil Roberts came off the bench to replace the injured Campion to curl a great effort into Rogers’ left hand corner.

The mood didn’t get any better before the break. With Cork City 3-0 up, Finn’s wayward effort in the 44th minute summed up Dundalk’s first-half.

Rogers did little to regain the trust of the supporters when he parried a Roberts drive within seconds of the restart. The Meathman recovered to recover the ball before anybody in a blue shirt could capitalise.

Daryl Horgan had a sniff four minutes later, turning well to let fly with his left foot but Tobi Adebayo-Rowling denied him with a great block. Horgan turned provider 60 seconds later, picking out McMillan with a great cross, but his header went straight at Nugent. 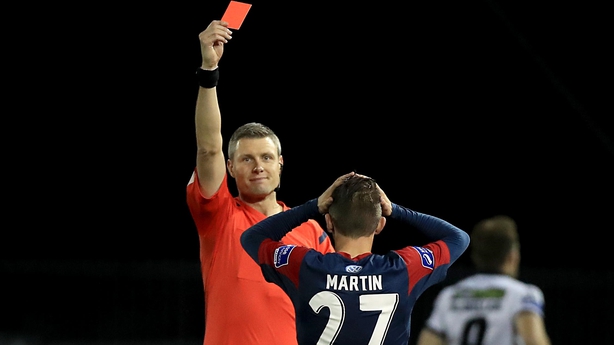 Dundalk were given hope when referee Ben Connolly sent Rovers winger Liam Martin off for hacking Sean Gannon down as he burst down the right flank in the 54th minute.

The result, though, was put beyond doubt six minutes later. Again, the home side’s defending left an awful lot to be desired but credit to Cretaro, who exchanged passes with John Russell to leave Andy Boyle for dead before rifling a stunning effort past Rogers.

Dundalk just couldn’t build a head of steam and Nugent denied McMillan with a brilliant stop before he also gathered a Horgan effort after the winger cut in brilliantly from the left to get his shot away.

Substitute Dean Shiels did get away from the goalkeeper but he couldn’t lift the ball into an empty net and Cretaro almost had the final say of a great evening for the visitors but his spectacular effort from 40-yards just evaded the target with Rogers scrambling.