Joe Allen's close-range finish earned struggling Stoke a 1-1 draw at Old Trafford as Manchester United were made to pay for sloppy finishing.

Record signing Paul Pogba had enough chances to put the game to bed on his own but his wayward finishing, coupled with a fine performance from on-loan Derby goalkeeper Lee Grant, meant United had to wait 69 minutes for substitute Anthony Martial's brilliant opener.

Allen's point-blank finish was scruffier, coming after a David De Gea parry and a deflection off the crossbar, but no less meaningful.

Stoke had lost their last 13 games at this ground, last gathering a point in 1980, but Grant's refusal to buckle on just his second top-flight appearance, coupled with Pogba's wasteful treatment of three gilt-edged chances, cost them dear.

United took just 90 seconds to open up a Stoke defence that had shipped 15 goals in its first six matches.
Pogba's pass left Zlatan Ibrahimovic free in the area but his low shot was well parried by Grant, who recovered in time to block the Swede's follow-up from a tight angle. 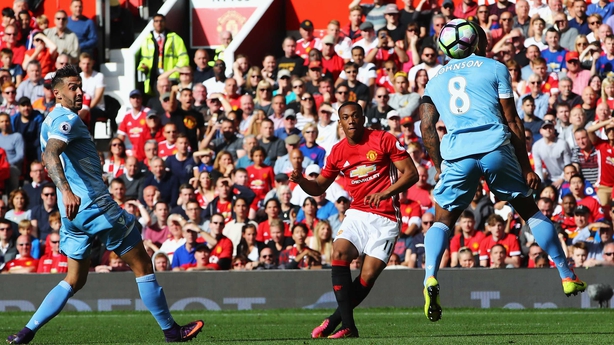 Both sides missed glorious openings either side of the quarter-hour mark, with some skilful build-up at either end let down by poor finishing.

After Xherdan Shaqiri's deft flick, Allen's cross evaded Wilfried Bony but was begging to be smashed home by the onrushing Geoff Cameron.

The American controlled his shot but it lacked venom, leaving De Gea to gather safely.
United responded with a neat move of their own, Ibrahimovic matching Shaqiri's quick feet with a reverse pass for Pogba who dragged wide with the goal at his mercy.

Grant ensured the stalemate reached until half-time, pawing a Juan Mata chip over after good build-up from Marcus Rashford and Pogba.

United's £89m Frenchman had a free header from the resulting corner but could not find the target.

The last chance of the half came when Ibrahimovic beat Bruno Martins Indi on the left and crossed with the outside of his right boot. Jesse Lingard stole in front of his man at the near post but his goal-bound touch was brilliantly blocked by Grant.

The Potters had begun to claw their way into contention after the restart, winning a handful of free-kicks in the United half, and should have taken the lead when a crisp passing move led to Allen bearing down on goal. 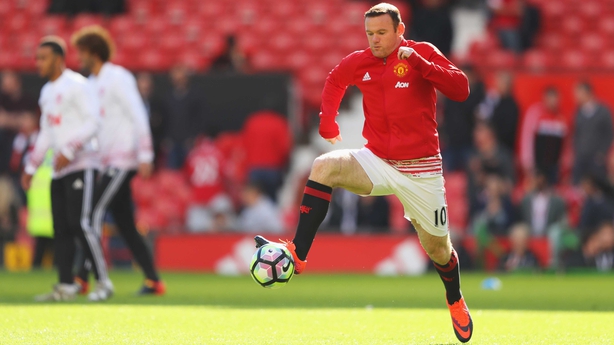 The Welshman scuffed his shot from close range, leaving De Gea and the rest of Old Trafford mightily relieved.

Ander Herrera and Ibrahimovic both went close from 25 yards, skimming efforts just wide, and the introduction of England captain Wayne Rooney and Martial after 67 minutes gave the Red Devils fresh legs up front.

The impact was instant, Martial looking for his fellow substitute only for the ball to break back to him via Cameron's interception.

Martial needed no invitation to try his luck from the edge of the area, curling a dipping shot into the far corner.

That looked to have settled matters but Stoke hit back in the 82nd mintue, Glen Johnson's deflected shot was weakly parried by De Gea before Jon Walters' cutback was forced off the bar.

Allen was on hand and gladly buried the loose ball. United had a glorious opportunity to rescue victory, Rashford crossing for Pogba, but he headed against the bar from a couple of yards.