Arsene Wenger will recall a host of first-team regulars after making 11 changes for Tuesday night's EFL Cup win at Nottingham Forest. The likes of Petr Cech, Laurent Koscielny, Mesut Ozil and Alexis Sanchez will return at the Emirates Stadium. Olivier Giroud (toe) faces a late fitness test while Aaron Ramsey (hamstring), Per Mertesacker, Danny Welbeck and Carl Jenkinson (all knee) are out.

Chelsea will remain without the injured John Terry as he is not fully recovered from the ankle injury he suffered in the recent 2-2 draw with Swansea. Fellow central defender Kurt Zouma, who injured his anterior cruciate ligaments, will soon return to training. Antonio Conte has an otherwise fully-fit squad to choose from and must decide whether to retain Cesc Fabregas against his former team after his two goals at Leicester. 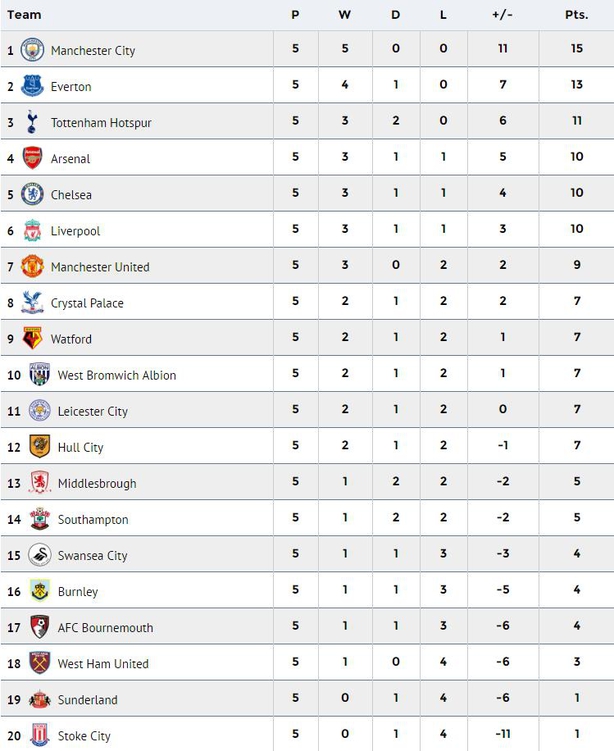 Manager Eddie Howe said there are a "couple of injury issues" for Bournemouth. Midfielder Dan Gosling will be hoping to be in the team after scoring in the Cherries' 3-2 defeat to Preston in the EFL Cup on Tuesday, as he is yet to start in the league this season.

Romelu Lukaku is set to return for Everton after missing Tuesday night's EFL Cup defeat to Norwich with a toe injury. James McCarthy and Darron Gibson (both groin) are making good progress and should be back within two to three weeks but Muhamed Besic (knee) is a long-term absentee.

Liverpool midfielders Adam Lallana and Georginio Wijnaldum are set to return after being rested for Tuesday's EFL Cup win over Derby. Striker Daniel Sturridge also missed the midweek clash with a niggle which could put his place against the Tigers in doubt. Goalkeeper Simon Mignolet is expected to return, despite summer signing Loris Karius making his competitive debut and keeping a clean sheet against the Rams.

Hull midfielder Jake Livermore returns to contention following the suspension which ruled him out of the EFL Cup win over Stoke. Caretaker-manager Mike Phelan must decide whether to recall him or retain Harry Maguire alongside skipper Curtis Davies. New signings Ryan Mason, Markus Henriksen, David Marshall, Will Keane, James Weir and Dieumerci Mbokani all started on Wednesday night and will be hoping to make their first league starts. 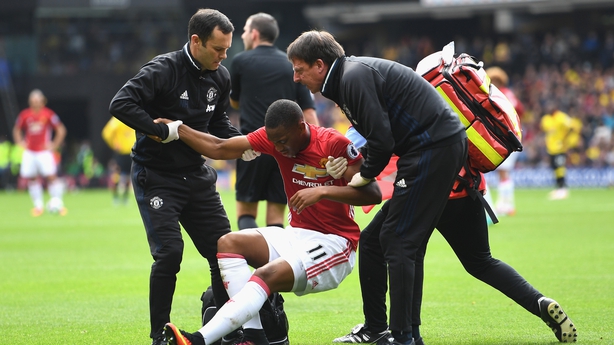 Anthony Martial will miss out for Manchester United. The forward was forced off in last weekend's defeat at Watford and, despite returning to training on Friday, will be absent with an ankle/calf problem. Luke Shaw (groin) and Henrikh Mkhitaryan (thigh) are back in contention for the squad, but Phil Jones (knee) remains absent.

Leicester defender Marcin Wasilewski is suspended after his red card in their EFL Cup defeat to Chelsea. Manager Claudio Ranieri is expected to recall several first-team regulars after making seven changes in the midweek 4-2 extra-time loss. Goalkeeper Kasper Schmeichel has recovered from concussion, but has suffered a minor muscle strain in training so is a doubt, while Matty James and Nampalys Mendy (both ankle) are still unavailable.

Middlesbrough head coach Aitor Karanka will welcome back Christian Stuani (groin) and Jordan Rhodes (knee) after both missed the defeat to Everton. Full-back Fabio (knee) and midfielder Grant Leadbitter (hernia surgery) are the only absentees as Boro aim to end a run of two successive league defeats.

Mousa Dembele and Eric Dier are both struggling with hamstring strains and Tottenham boss Mauricio Pochettino must make a late decision on whether either of them feature. Danny Rose will also be assessed as he nears recovery from his own hamstring injury. Harry Kane remains sidelined with an ankle problem meaning Vincent Janssen will be handed his second Premier League start up front. 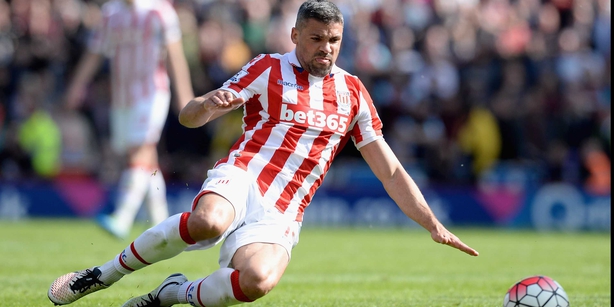 Stoke winger Xherdan Shaqiri will undergo a late fitness test. The Switzerland international has not featured since the first game of the season due to a calf injury but has been training this week as he closes in on a return to action. Forward Jonathan Walters is a doubt after missing the EFL Cup loss to Hull on Wednesday because of an ankle problem.

West Brom boss Tony Pulis will have an unchanged squad against his former club. James Morrison's return from injury against West Ham and Hal Robson-Kanu's inclusion for the first time last weekend means the only player unavailable to Pulis is Chris Brunt (knee).

Adnan Januzaj returns to the Sunderland squad after suspension, and he will be joined by fellow midfielder Jack Rodwell and striker Jermain Defoe following their respective recoveries from groin and calf injuries. Midfielder Wahbi Khazri has recovered from illness and frontman Victor Anichebe is close to being available as he works his way towards match fitness, but goalkeeper Vito Mannone (elbow), midfielder Sebastian Larsson (knee) and striker Fabio Borini (groin) are still out.

Palace are without captain Scott Dann after he suffered a minor hamstring injury in the EFL Cup defeat at Southampton. He also remains a doubt for next Friday's match with Everton, but James Tomkins has been passed fit and will replace him alongside Damien Delaney in central defence. Eagles boss Alan Pardew will also name Delaney as captain. 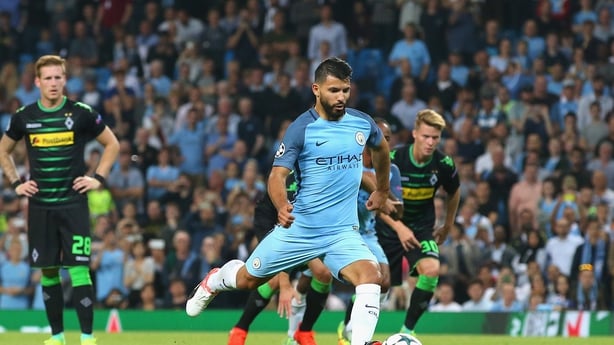 Record signing Borja Baston could make his first Premier League start for Swansea after impressing in Wednesday's 2-1 EFL Cup defeat against City, while Swans boss Francesco Guidolin must also decide whether to involve club captain Leon Britton after the 34-year-old shone in midweek. Winger Nathan Dyer, meanwhile, has undergone surgery to remove extra bone that had grown on his ankle. He is likely to be sidelined until mid-November.

Top scorer Sergio Aguero returns for Manchester City after completing his domestic suspension. Captain Vincent Kompany is facing another lay-off after suffering a groin injury in his comeback game against the Swans in the EFL Cup in midweek and no date has yet been put on his return. Playmaker David Silva might return after a muscle injury but midfielder Fabian Delph could still be doubtful and Nolito is suspended.

West Ham will be without a recognised left-back against the Saints after Arthur Masuaku joined Aaron Cresswell on the sidelines with a knee injury. Boss Slaven Bilic can welcome back centre-half Winston Reid, however, after he shook off the knock which has kept him out him for a fortnight. Andy Carroll is progressing well after a knee injury and will be back after the international break. Fellow forwards Andre Ayew (thigh) and Diafra Sakho (back) are still out.

Southampton will again be without forward Jay Rodriguez because of a groin problem. Saints manager Claude Puel is expected to recall his first-team regulars after changing the side for the midweek EFL Cup win over Crystal Palace. Club-record signing Sofiane Boufal continues his rehabilitation from a knee injury, and the Morocco midfielder could make a belated debut after the international break, while right-back Jeremy Pied (knee) is a long-term absentee. 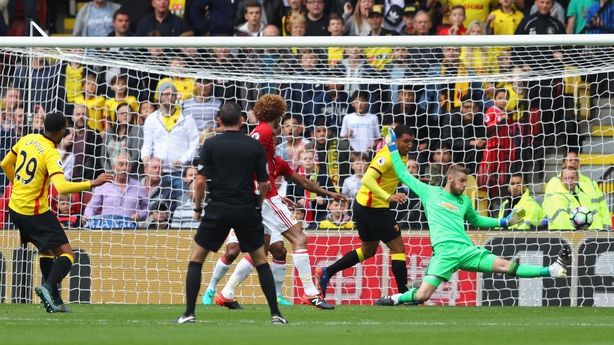 Burnley will be without striker Andre Gray after he was banned for four matches for comments he made on social media. The suspension may bring Sam Vokes into contention for a start, with the likes of Johann Berg Gudmundsson, Patrick Bamford and Jon Flanagan also angling for promotion from the bench.
Hamstring victim Ashley Barnes is the only notable absentee.

Watford will be without defender Daryl Janmaat after the Holland international suffered a shoulder injury in Watford's impressive 3-1 victory against Manchester United. He could be sidelined for six weeks. Defender Jose Holebas is also an injury doubt, while a number of other players will be evaluated over the coming days to determine their fitness for the trip to Lancashire.