Leicester goalkeeper Kasper Schmeichel has suffered an injury scare and is a doubt for the Foxes' trip to Manchester United.

The 29-year-old has a muscle strain after missing the last two games with concussion and was forced out of training on Thursday.

Ron-Robert Zieler has deputised for the Denmark international in their 3-0 Premier League win over Burnley and Tuesday's 4-2 extra-time EFL Cup defeat to Chelsea.

"I've supported United for as long as I can remember. My uncle and my friends were Reds and I followed them" - Danny Simpson

Boss Claudio Ranieri said: "Today he made some (of the) training session but he felt a little pain to a muscle so tomorrow I will check.

"I am not a doctor but the concussion is OK. Let me check (on him) tomorrow. If it is nothing serious then he will come and play, if not he will stay at home."

Marcin Wasilewski is banned after his red card against Chelsea while Nampalys Mendy and Matty James (both ankle) will not be risked.

Leicester go to Old Trafford on Saturday 11th in the Premier League but just two points behind United, who they drew with twice last season.

May's 1-1 draw at United all but sealed their shock title and Ranieri insisted his reigning champions should not be scared with Jose Mourinho's new-look side suddenly stuttering after successive league defeats, despite Wednesday's 3-1 EFL Cup win at Northampton.

He said: "We are fearless. Why are we scared to go there? More than lose, what can we do there? Why? I enjoy, 70,000 people is amazing, fantastic. I don't want to go when there is just you and me to play. It is very bad show.

"It is not the first time they (Leicester's squad) play against United. Now they are experienced players. It is normal. When you go in this big stadium you want to show your best." 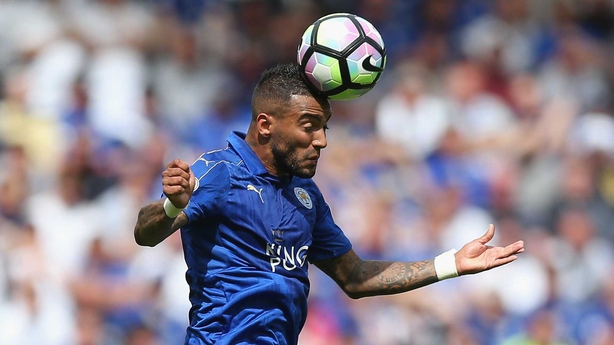 Lifelong United fan Danny Simpson echoed his manager's comments, saying: "You can look at it in different ways. They won't want to lose again so they may be more hungry and more determined especially with them being at home.

"If we start well they might feel the pressure from their fans or the players might not have as much confidence."

The defender continued: "I've supported United for as long as I can remember. My uncle and my friends were Reds and I followed them.

"I was picked up by United's youth scouts who had seen me playing locally on Saturdays and Sundays at Deans FC, the same club where Ryan Giggs was."

Simpson went on to spend four years as a professional at Old Trafford before being sold to Newcastle United in 2010 after a series of loan moves.

"I was fortunate enough to be playing for United as a kid and eventually got my first full professional contract and went on to make it into the first team," he added.

"I was lucky enough to play with some of my heroes. I'll always be a Red deep down."