Lionel Messi helped give Celtic another harsh Champions League lesson with a hat-trick as Barcelona thrashed the Hoops 7-0 in their Group C opener at the Nou Camp.

This was the Hoops' first game back in the group stage of the competition for three seasons, their most recent match ending in a 6-1 defeat the same venue, and it was another chastening evening for the Scottish champions.

Brazilian star Neymar set up Lionel Messi for the opener in the third minute and the Barca captain added a second from close range in the 27th minute after Parkhead striker Moussa Dembele had a penalty saved by Marc-Andre ter Stegen.

Neymar added a third five minutes into the second half with a wonderful free-kick, substitute Andres Iniesta scored with an even better volley and then Messi tapped in for his third with half-an-hour to play. 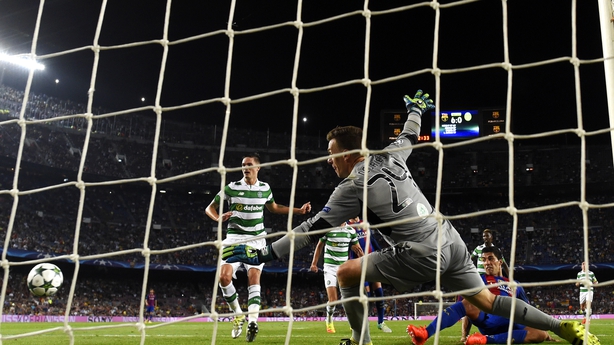 As Celtic continued to chase shadows Luis Suarez grabbed a double to give Celtic their heaviest European defeat.

Hoops boss Brendan Rodgers' bid to contain Barca included giving a debut to Costa Rica defender Cristian Gamboa, signed from West Brom at the end of the transfer window, and the 26-year-old was one of two changes in a 5-4-1 starting formation, with wide-man Patrick Roberts also coming in.

After scoring a hat-trick in the 5-1 win over Rangers, and in the absence of injured Leigh Griffiths, Dembele was again asked to lead the line.

An under-strength Barca side had lost 2-1 to Alaves in LaLiga on Saturday.

However, most of Luis Enrique's big stars returned with Messi, Neymar, and Suarez starting together for the first time this season.

In his pre-match press conference Rodgers had waxed lyrical about Suarez, whom he bossed at Liverpool.
However, it was Messi who drew first blood when he raced on to a clever pass from Neymar and from an angle drove high past Dorus de Vries and into the far corner.

Unsurprisingly Barcelona dominated possession, probing the Parkhead rearguard with familiar patience.
However, the visitors were dramatically handed the chance to level when Scott Sinclair raced forward and played in Dembele who went down as he tried to go round Ter Stegen with referee Ovidiu Hategan pointing to the spot. 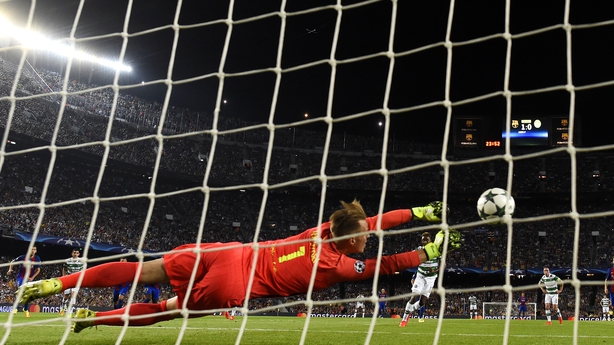 The German goalkeeper dived to his right to push Dembele's shot away for corner which the home side survived.

The award appeared to irk Barca and three minutes later Messi and Neymar walked through the Celtic defence with the Argentina star knocking the ball over the line from about three yards out.

Hoops left-back Kieran Tierney cleared an Ivan Rakitic shot off the line and De Vries saved from Neymar as the home side pushed relentlessly for more goals.

Sinclair, who looked a threat, had the ball in the net at the other end but the flag had already gone up.
The second half was even more painful for the small band of Hoops fans high in the stands.

Iniesta replaced Rakitic and only four minutes had elapsed when Messi was fouled by Nir Bitton, giving Neymar the opportunity from 25 yards to stick the ball in the top corner leaving De Vries clutching air.

If that strike was good then Iniesta's volley from Neymar's cross was remarkable in its execution.

Moments later Messi slid in a pass from Suarez for number five before Neymar picked out the advancing former Liverpool player with a fine chip over the Hoops defence, and he turned and thrashed the ball high into the net.

Celtic were demoralised. Messi hit the post before setting up Suarez for the seventh which ended a night of torment for the Glasgow club.