Ciaran Kilduff’s 65th-minute header booked FAI Cup holders Dundalk their place in the semi-finals of the competition as The Lilywhites overcame First Division side UCD at The Belfield Bowl.

The 27-year-old rose highest to head home a Daryl Horgan cross to finally break the Students’ resistance and spare Dundalk a replay on Monday night that they could really have done without.

With matches against Finn Harps and AZ Alkmaar on the horizon, Dundalk manager Stephen Kenny rotated his side, making 11 changes to the side that beat Sligo Rovers three nights earlier.

The big news was the return of Kilduff, the striker returning a couple of weeks ahead of schedule from a knee injury, and he was involved after just 73 seconds, testing Niall Corbett in the UCD goal after good approach play by Dean Shiels and Shane Grimes.

Shiels and Kilduff then combined to set up Michael O’Connor for a pop at goal but the teenager’s effort was wayward and went over the top.

The bright opening to the tie continued and the hosts should have drawn first blood in the seventh minute. Gary O’Neill’s free kick picked out the unmarked Ryan Swan, 12 yards out, but he couldn’t keep his effort on target.

The pace of the game never let up and Dundalk went within inches of going ahead in the 11th minute. Shane Grimes’ cross found Michael O’Connor at the back post and his deflected drive across goal was almost turned home by the incoming Shiels.

Collie O’Neill’s side gave as good as they got and Gabriel Sava had the woodwork to thank for coming to his rescue in the 19th minute when Cathal Brady’s blistering strike from distance zipped past him only to crash off the post.

Kilduff should have scored against his old club in the 35th minute. Slipped through by Shiels, the 27-year-old lifted his effort over Corbett but it lacked accuracy and went wide.

Referee Derek Tomney didn’t endear himself to the large travelling support, turning down four valid appeals for a Dundalk penalty. The last of those, which saw Mark Langtry and Ciaran O’Connor tussle, resulted in the Dundalk player limping off just before the interval.

Kenny showed his intentions by sending on Patrick McEleney early in the second period but despite enjoying most of the possession, Dundalk didn’t really create anything too clear cut in the opening 15 minutes of the half. 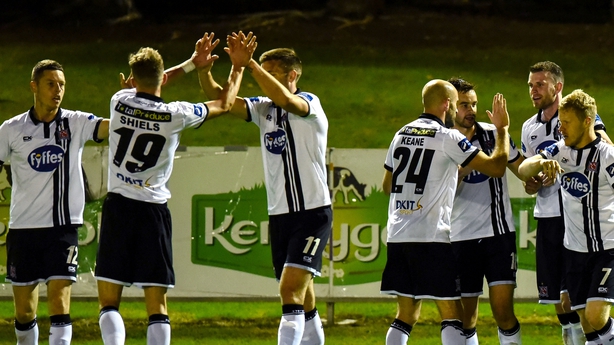 That all changed in the 66th minute. Horgan seized on a loose ball to leave Tomas Boyle for dead and he delivered a beautiful cross from the right for Kilduff to head past Corbett to break UCD’s resistance.

Kilduff should have doubled his tally seven minutes later when he collected a Horgan pass but he took too long to shoot and the chance went abegging. Horgan almost fared better shortly after, running at the UCD backline before firing a wicked drive just over the top.

The little winger then danced through the Students' backline only to see his curling attempt hit the side netting with eight minutes left on the clock and Dundalk had more chances to kill it off before the death as they saw it out comfortably.

The fixture was originally scheduled for Monday, 15 August 15 but was scratched due to the Lilywhites' European commitments.