Robbie Brady has warned that the Republic of Ireland can no longer afford to bask in the glow of their performances at the Euros ahead of the start of their World Cup qualifying game in Serbia tonight (kick-off 7.45pm).

Brady scored two of Ireland's three goals at the tournament in June, including a memorable winner against Italy that secured a place in the last 16, but the Dubliner's mind has now firmly turned to reaching Russia in 2018.

"To take credit from the tournament and put in some decent performances is brilliant but it's time to show it all over again," he told RTÉ Sport.

"We need to forget about that for now and crack on for the World Cup.

"This won't be an easy place and they're going to be a good side.

"There are a lot of teams in this group that fancy themselves. We've been in a good run of form over the last year or so. We've picked up some big results and proved our worth.

"We're confident and hopefully we can get off to a good start."

Brady has played at both left-back and left-midfield under Martin O'Neill and though he insists he's comfortable in both positions, the Norwich man reveals that he enjoyed the more advanced role in France that allowed him to get on the scoresheet.

"I have no real preference. I'll play wherever I'm asked to," he said.

"I enjoyed the Euros and getting the chance to play that bit further on. I felt like I saw more of the ball and I enjoyed playing there.

"I fancy myself that if I get half a chance I'll be able to put it away." 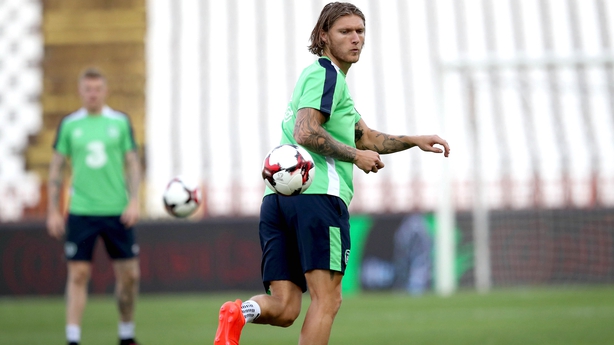 There was surprise that Brady didn't join fellow tournament star Jeff Hendrick in securing a move to the Premier League when the transfer window closed last Wednesday.

He admits that having deadline day on the same day as the friendly win over Oman was a minor distraction in the camp but says he hadn't expected a move.

"Speculation died down the last few weeks so I was just getting my head around the task at hand, and getting ready to go at Norwich.

"I wasn't really expecting anything much.

"There was a bit of a weird feel throughout the day, there were sniffs here and there, and the lads managed to get the moves they were after, which was brilliant.

"Especially Jeff. He's been desperate to go and prove himself in  the Premier League and he's got a great chance to do that now with Burnley.

"He's a fantastic player and I'm sure he's going to show that this season."

Watch Serbia v Republic of Ireland live on RTÉ2 and RTÉ Player from 7pm, listen live on 2fm or follow our live blog.