Two years on from a victory in Hungary which kickstarted their run to the Euro 2016 finals, the feel-good buzz accrued from featuring in France this summer evaporated somewhat with a stalemate against the equally underwhelming Czechs.

Boss O'Neill may be satisfied with a share of the spoils, a return they only got due to Novak's mystifying second-half close-range blunder, but the manner of performance suggested there is plenty to do if they are to reach Russia in 2018.

The presence of world champions Germany - who beat Norway 3-0 - in their group had both teams stressing before the match that their realistic aim was to snaffle the group's play-off berth, and a below-par contest indicated a fear over an opening loss.

This Czech side have no Petr Cech or Tomas Rosicky, or players of equivalent quality, and the transition is not capturing their nation's attention if the clusters of empty seats in Prague were anything to go by.

Former Slavia Prague boss Karel Jarolim, in his first competitive match as boss, may have instantly won over those in attendance at Sparta Prague's ground had Pavel Kaderabek finished at the back post early on when left alone from Novak's cross. 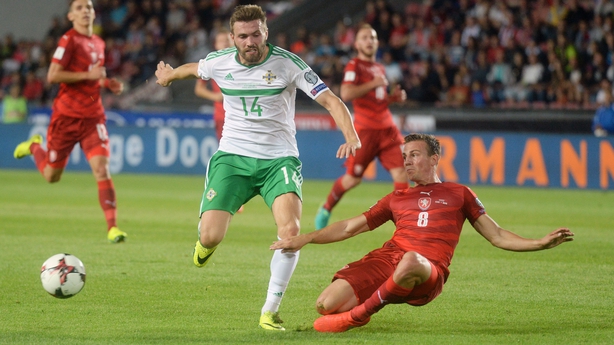 Their opponents' cohesion was non-existent, though, and two of Northern Ireland's brighter performers in the Euro 2016 qualification campaign, Steven Davis and Kyle Lafferty, were among the poorer performers in white.

Paddy McNair, who was among those brought in from the side defeated by Wales in Paris, also looked lost having been switched from the right side of a midfield three to the left and back again within 21 minutes.

There is hope the youngster could truly develop to a player befitting his Premier League status on the road to Russia and he showed why O'Neill rates him so highly by firing a left-footed try which Tomas Vaclik had to push wide from 20 yards.

That was as good as it got for Northern Ireland and any hopes the rust would be shaken off after the break proved unfounded.

When McNair's short pass went straight out of play, the Czechs broke and a last-ditch challenge from Conor McLaughlin prevented Novak from testing Michael McGovern, who then almost gave the hosts a glorious opportunity when failing to claim a routine cross.

There was no Northern Irish pressure when Vaclav Kadlec was given space to fire a weak side-footed attempt straight at McGovern and nobody in O'Neill's ranks was anywhere near Novak when the ball dropped to him seven yards out.

Fortunately for McGovern and his team-mates, the full-back somehow smashed his left-footed attempt wide to absolute disbelief around the Generali Arena.