Jeff Hendrick has joined Premier League side Burnley from Derby County for a club record fee, signing a three-year contract.

Hendrick's fee is reported to be in the region of £10million. That is more than the £8million they paid Anderlecht to bring Belgium midfielder Steven Defour to Turf Moor two weeks ago.

The Dubliner impressed for Ireland at Euro 2016 and has also attracted interested from Hull City this summer.

Hendrick, originally of St Kevin’s Boys, came through the Derby academy, scoring 27 goals in 214 games since his debut for them in 2011. He has 25 caps for Ireland. 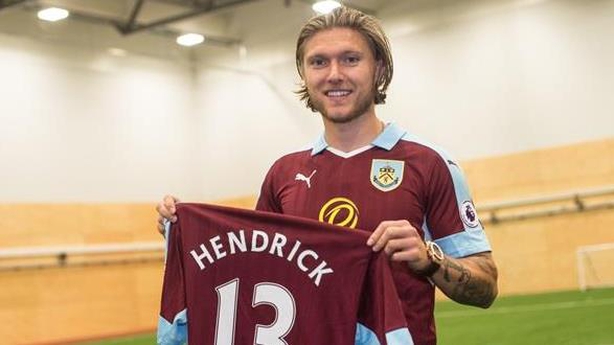 Burnley boss Sean Dyche welcomed the news and said.: "After a protracted deal, we have got a main target of ours and we welcome Jeff to the club and hope he does well.

"He is someone who can add to our strength in midfield and he's a player who is still learning and still developing and is someone who we think we can work for us now and in the future."

Hendrick added:"The Premier League was a big draw for me and it's where I aspire to be after the summer I've had.

"Burnley did so well last year going unbeaten for five months and how much they wanted me this summer was a real positive for me.

"I know there have been a number of bids and I was sitting there waiting for one to be accepted.

"I would have preferred it to happen earlier to get to know your team-mates and coaching staff a bit more but I am just thankful it's done now and I can go away with Ireland knowing my future is settled.

"It's a little weird signing for a club and not meeting everyone for more than a week, but I am really looking forwards to getting back and training with the lads."

✍ We're delighted to announce the signing of Jeff Hendrick for a club-record undisclosed fee. #WelcomeJeff pic.twitter.com/t83fOmlXq2