The 18th goal of David McMillan’s season got Dundalk back to winning ways domestically to move the champions four points clear at the top of the SSE Airtricity League Premier Division table.

Though they dominated for long spells, Stephen Kenny’s Lilywhites had to work hard for their victory against a tenacious Youths side who played the last half-an-hour with ten men when Peter Higgins received a second yellow card.

McMillian struck home seven minutes before the break for the only goal of the game.

Dundalk made five changes from their Champions League exit to Legia Warsaw in Poland on Tuesday with the most notable one being the return after a six-week absence with a broken wrist of central defender Brian Garland.

Ironically, given their respective league positions, it was Youths, with four changes from their FAI Cup win over Sligo Rovers last week, who went into the game on the back of two victories as Dundalk looked to end their run of  successive league defeats.

And it was Youths who troubled the champions early on, Jonny Bonner flashing a free-kick wide of Gary Rogers’ right-hand post after a foul by Andy Boyle on the hardworking Aidan Keenan.

Shane Keegan’s side maintained their bright start as Andy Mulligan’s jinking run in from the left set up Shane Dunne who rifled a powerful shot just over the top as Dundalk struggled to settle.

Doyle then smothered at the feet of Mountney minutes later before then gathering a shot from distance by Darren Meenan as Dundalk came right in the game. 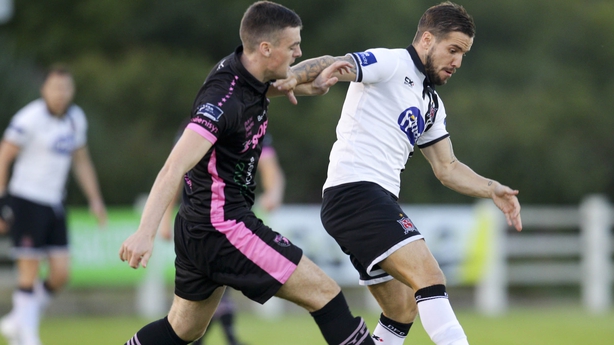 And while there was an element of initial good fortune about what proved their match winning goal on 38 minutes, it was no more than Dundalk deserved.

Dunne’s attempted pass near the halfway line ricocheted off Mountney’s block to give McMillan a run on goal.

The striker had the pace to hold off the backtracking Conor O’Keeffe and rifle his shot past Doyle to the net for his 13th goal of the league campaign.

Dundalk remained in command into the second half with Robbie Benson forcing a save from Doyle with a powerfully struck free kick on 59 minutes before Wexford were reduced to ten men a minute later.

Youths’ midfielder Peter Higgins, booked in the first half, was shown a second yellow card for a foul on Sean Gannon.

Predictably, Dundalk dominated the remainder of the game but, despite efforts from Ronan Finn, twice, and substitute Patrick McEleney, failed to add to their winning margin.