Stephen Kenny admits that his side have a mountain to climb as Dundalk try to overturn a 2-0 deficit against Legia Warsaw to progress to the group stages of the Champions League.

The League of Ireland champions matched their esteemed Polish opponents for large segments of the first leg last week in Dublin but were cruelly undone by a 95th-minute injury time goal, which gives Legia the cushion of a two-goal lead going into tonight’s game at the Polish Army Stadium in Warsaw, kick-off 7.45pm.

And Kenny still feels hard done by Legia’s opening goal at the Aviva, which came from a penalty that the Dundalk manager believes should never have been awarded as Andy Boyle accidentally handled the ball in the box.

“We’re not asking the players to do anything that they haven’t done before." - Stephen Kenny

“The game in the Aviva Stadium, we had equal possession,” said Kenny ahead of the game.

“It was a very controversial decision that went against us, and we shot ourselves in the foot by conceding in the 95th minute.”

But Dundalk have some impressive away performances in Europe to draw on from the past few seasons competing in Europe, and the manager believes that his side can draw on those past experiences to help them in their tough task to progress to the group stages of this year’s competition.

“We have a mountain to climb, we know that, but I do feel that we’ve shown a capacity to score goals away from home in Europe.

“We’re not asking the players to do anything that they haven’t done before. It’s a formidable task but it’s one that we’ll have a go at.”

Dundalk will enter the red-hot arena of a sold out Warsaw stadium but the manager knows that should his side score first, they have a chance of silencing the crowd and putting pressure on the home team.

“We’ll relish going into that environment, try to score the first goal and see where it takes you.”

The Dundalk manager must plan for tonight’s game without influential captain Stephen O’Donnell, who guided Shamrock Rovers to a historic European victory in 2011 when the Hoops beat Partizan Belgrade away from home to qualify for the Europa League group stages, and Andy Boyle will captain the side tonight in his absence. 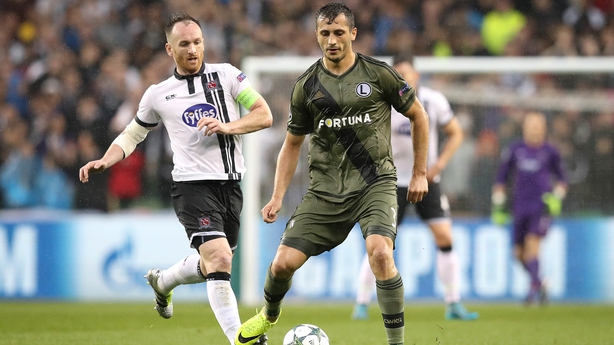 But the manager enjoys a wealth of experience in his side and goalkeeper Gary Rogers is another senior player looking to instil confidence as the league champions attempt to become the first Irish side to reach the group stages of Europe’s elite club competition.

“You have to be positive going into these games,” said Rogers. “You feel that we didn’t get the result that we deserved in the first leg but that is behind us now and we have to look forward to what we have to do in the next leg.

“I know a lot of people will write us off and say that we don’t have a chance having to score two goals over there but we believe that we can do that and I don’t think there would be any point going out there if we didn’t.

“They will fancy their chances of beating us but we know that we are more than capable on our day and certainly there are goals all over the team and we’d be hopeful that we can go and get the first one.”

And while Dundalk know that should tonight’s clash in Warsaw end with elimination, the Lilywhites have the consolation of, at least, six more European games to look forward to as they are already guaranteed a place in the Europa League group stages.

But keeper Rogers says that there has been no talk of the Europa League with everyone focused on the task at hand tonight.

“When you’ve come this far, we might as well shoot for the stars and try to get that Champions League group stages slot that everyone dreams of.”