Shay Given has announced his retirement from international football.

In a 20-year career between the posts for the Republic of Ireland, the Lifford native amassed 134 caps.

Given, however, is set to continue with his club career at Stoke City.

The 40-year-old took to Twitter to thank his team-mates and fans for all their support during his time as the Irish custodian.

Given represented his country at the 2002 World Cup and the 2012 European Championship. He previously retired from international duty after the latter tournament, but returned to help his country qualify for this summer's Euros in France, where he was part of the squad but did not play.

Writing on Twitter, he said: "It's every boy's dream to play football for his school, his local club, and maybe, in his wildest dreams, his country.

"I'm one of the very lucky ones who got to wear the jersey for his country and wore the badge with pride 134 times.

"But now it's time to hang up the gloves and move from the onion bag to the terraces, where I'll be shouting the lads on as one of Ireland's biggest fans."

Thanks to all the irish fans around the world 🙏🇮🇪🙏🍀🍀🍀 pic.twitter.com/KSS1U6yZPl

Ireland manager Martin O'Neill paid tribute to given by saying: "There is no question that Shay was one of the best goalkeepers ever to don an Ireland shirt. I had the privilege of working with him these last few years.

"He came out of international retirement, worked his way back into the national team and was doing brilliantly until suffering an unfortunate injury against Germany last October. Despite not playing in France at UEFA EURO 2016 he was still a very positive influence in the camp.

"His club record speaks for itself. Those players who played in front of him all bear testimony to his brilliance. He is one of the best goalkeepers to have played in the Premier League since its inception."

FAI CEO John Delaney added: "Shay has been a magnificent servant to Irish football and he has been a fixture in Ireland teams for two decades, experiencing some of the greatest moments for our national team.

"I would like to wish Shay the very best on his retirement and for the future as he continues on with his club. Shay will be welcome back to the Aviva Stadium any time." 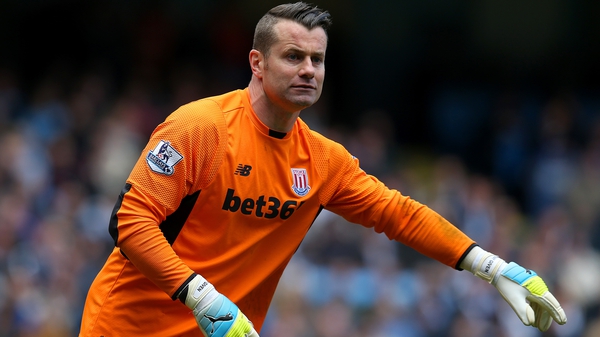