Dundalk have qualified for the third qualifying round of the Champions League after an away goals win over FH in Iceland.

The Lilywhites went behind after good play by the hosts saw former Dundalk player Steven Lennon play in Sam Hewson, who slotted past Gary Rogers on 18 minutes.

However, they recovered well from that setback and enjoyed the best chances of the remainder of the first-half with Daryl Horgan unlucky not to score while Patrick McEleney also had a good chance.

Despite finishing the half well, Kenny made a change at the interval, bringing in Robbie Benson for John Mountney and the former UCD was full of energy after the break as Dundalk sought a way back into the tie.

They found it when they won a penalty approaching the 50 minute mark after centre half Patrick Barrett, in for the injured Brian Gartland, was brought down in the box.

Ronan Finn stepped up but his shot was at the right height for 'keeper Gunnar Nielsen in the FH goal and the Icelandic champions cleared their lines.

However, Dundalk's bright spell continued and David McMillan came deep to pick up the ball moments later before unleashing a low shot that found its way into the back of Nielsen's goal via the left post.

That goal levelled the tie on the night and on aggregate, but Dundalk weren't happy to settle there and ten minutes later good work from Horgan on the right flank saw him pull back to McMillan.

The striker had arrived late in the area and shot through Nielsen's legs to give Dundalk an invaluable second goal.

After that, FH switched to a more attacking style and for 15 minutes Dundalk defended well before substitute Kristjan Floki Finnbogason put the hosts back level on the night.

However, Dundalk still led overall thanks to their two away goals and they managed to hold on for a nervy, and at times hectic, final ten minutes to secure an historic win.

Stephen Kenny's side will now face BATE Borisov, who eliminated them in the second round last year, in the third qualifying round.

Their progression also guarantees at least two more European ties for the club - if they lose out to BATE they will enter a playoff to reach to the group stages of the Europa League. 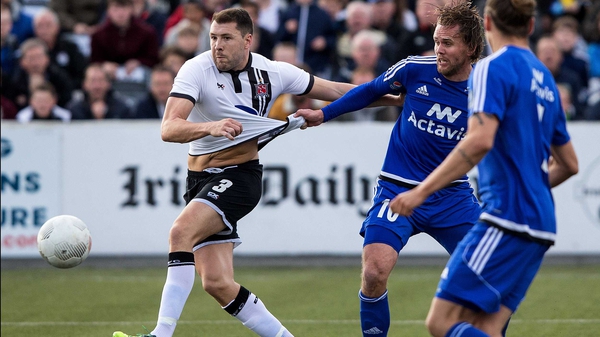