New Manchester City boss Pep Guardiola believes renewing his rivalry with Jose Mourinho can help him reach even greater levels as a manager.

Guardiola who won six leagues titles, a pair of Champions Leagues and four domestic cups during his time with Barcelona and Bayern Munich before being appointed Manchester City boss.

He met the press for the first time on Friday, just three days after his nemesis Mourinho was unveiled across the city at Manchester United.

The two previously locked horns in fiery El Clasico encounters in Spain, when Guardiola was in charge of Barcelona and Mourinho held the reins at Real Madrid.

The Spanard thinks trying to out manoeuvre the best coaches in the world has brought the best out of him – and will continue to do so in the Premier League.

"I think Jose said it pretty well that it is not about him or me," Guardiola said.

"What I saw from the distance is it is so tough to win the games here. We played many times against each other. I can say, they help me, the big coaches, and Jose is one of them, they help me to reach another level.

"My experience against him, against (Liverpool boss) Jurgen Klopp at Dortmund, a lot of coaches in Germany and Spain they made me better. All the managers in the world want to win and we are going to try and win as well."

Guardiola will experience his first competitive game in charge of City at home against Sunderland on Saturday, August 13.

Guardiola, 45, has cast his eye over the City squad after they returned to training this week, though England pair Raheem Sterling and Joe Hart were not present despite their early Euro 2016 exit.

The former has copped plenty of flak following events in France, yet his new boss is relishing working with a player that cost City almost £50million last summer.

"I hear the last 10 days what happened, especially with Sterling," Guardiola added.

"Of course he has a little problem that the money they paid is always in the mind of the people but I am curious, I am looking forward to working with him to try to help him, to show him how good a player he is and not just him, Joe Hart and the other English players.

"In Barcelona the basis was Catalan, Spanish players, in Bayern Munich the basis was (German players) and I would like to work with English players here but they are so expensive, more than the other players around the world."

There have been critics of Sterling's club colleague Yaya Toure, too, though Guardiola insisted he did "very, very well at Barcelona", where the two were together before the manager sold him to his current employers during his time in charge.

As for skipper Vincent Kompany, whose plethora of injury problems over the past two years have robbed City of their captain for extended periods of time, Guardiola is keen to ensure he stays off the treatment table.

"My dream for Vincent Kompany is to be fit," he noted.

"Especially in the last two years, he's played not too many games.

"The captain has a lot of experience, he's a magnificent central defender but he has to be fit. We spoke to him and said, 'Just focus on your body, forget about the other kind of things', to come back to what you were in the past. After that, Vincent will show his qualities."

As he had done during a fans' event at City's academy on Sunday, Guardiola reiterated his intention to prove his managerial credentials in England as he bids to emulate the success he achieved in Catalan and then Bavaria with an aesthetically-pleasing style of football.

"I was in Barcelona where I had absolutely everything, the best player ever, one team where most of the players grew up from the academy so I knew them," he said. "Bayern Munich were a club who had a lot of experience for many, many things.

"Here, it's another test for my career. It would have been comfortable to stay where we were. I feel this is the right moment to come here and prove myself, if I'm able to convince my players to play the way we want." 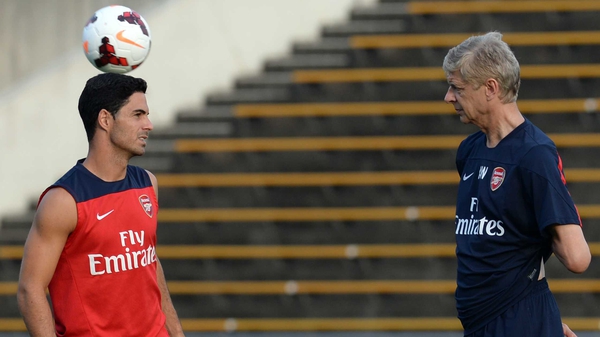 Arteta leaves Arsenal and joins City as a coach