Cork City manager John Caulfield felt his side were full value for their away win in the Europa League first qualifying first leg at Linfield, but knows they will be in for a difficult return leg next week.

It’s advantage to the SSE Airtricity League side in the all-Ireland clash, with striker Sean Maguire’s second-half penalty the difference between the sides at Windsor Park.

Roy Carroll returned from Northern Ireland’s Euro 2016 exploits and was the busier of the goalkeepers on the night and Caulfield admitted that the manner of the win was pleasing as well as the result itself.

“It was important to score. It’s a long time since we won away in Europe,” he told RTÉ Sport.

“We started quite well, but Linfield came into it. We defended quite well even though they only had one chance.

“At half-time we said to try and keep the ball moving and up the tempo.

“In the second half we scored, Roy Carroll made a terrific save and we had one cleared off the line, so overall we’re very pleased, but we must make sure we finish the job off next week in Cork.” 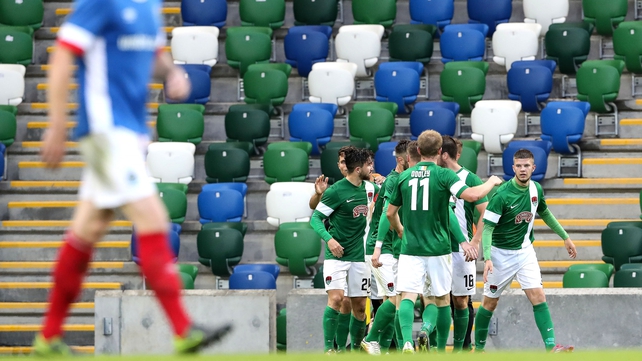 Daniel Morrissey was a half-time replacement for Karl Sheppard, while Mark O’Sullivan’s introduction for Garry Buckley saw the visitors switch to a 4-3-3 and the tactical tweak paid dividend after the break.

“We are a very attack-oriented team

“We felt the tie could be won here and we certainly felt we could score and we know the importance of that.”

Linfield are not currently in action, and while City had a two-week break during the European Championships, their 0-0 last week against Shamrock Rovers allowed them to get one competitive game under their belt before European action.

Caulfield felt fitness could not be used as an excuse for the home side, with Cork’s dominance of possession key to the victory.

“Teams tire when they can’t get the ball. For long periods of the game, there didn’t seem to be any problems with their passing.

“Overall our passing was probably slicker and better.”

Passage through to the next round would be a welcome financial injection for the Airtricity side and Caulfield has urged supporters to turn out next Thursday against a side who will “fancy coming down and nicking a goal”.

“It’s good to be going down to our own supporters next week,” he said.

“We need a massive crowd out to see if we can get over the line because financially its a huge incentive to get to the next round.” 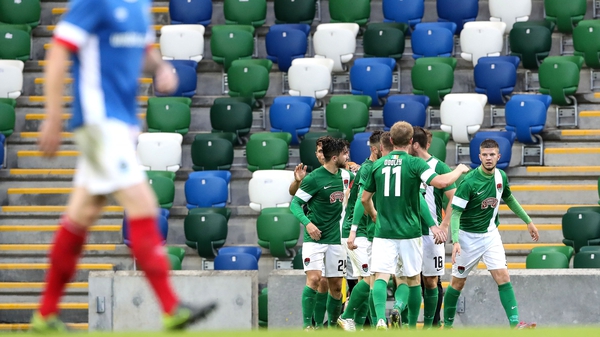