Pat Fenlon doesn't expect the Republic of Ireland's exploits in France to inspire fans to flock to domestic games, but he does believe a European run of his own could capture the public imagination.

Tens of thousands of Irish supporters travelled to the Euros to see Martin O'Neill's men make the last 16, eventually falling to the host nation after a gallant effort.

They earned widespread praise for the colour and atmosphere they brought to the tournament, but Fenlon said there's more chance of his Shamrock Rovers side boosting the league than the national team.

"We've seen it before," he told RTÉ Sport. "I've been involved in the league a long time. We've never got a real bounce from the national team doing well because I don't think the interest is there.

"[The league] needs a better structure, we need to sit down and work out how we can get that.

"We've never got a real bounce from the national team doing well."

"We'd three players in the first game, four in the second and five in the third that all played in the League of Ireland so there's a product there.

"There's players coming through the system even though we don't have a lot of finances, a lot of resources, we're still producing players who go on to better things."

The Hoops face RoPS Rovaniemi at Tallaght Stadium on Thursday night [8.0pm] in the Europa League first qualifying round.

Fenlon was in charge of Shelbourne when they scared the life out of Spanish giants Deportivo La Coruna in the final Champions League qualifying round back in 2004, and believes that kind of run is the only way to get more bums on seats in the SSE Airtiricity League.

"I think you've seen over the years when some of the teams went on great runs, that seems to be the one thing that gets people interested," he said.

"The hardcore fans will go on a regular basis, but when some of the teams have progressed we've been able to attract new support. Our problem is being able to hold on to them after that.

"The more we can progress it does help, but it's a bigger picture than that for me. We need to look at the league and how it's structured and how it's run, and how we promote it to make it better."

Fenlon has done his homework on Finnish visitors RoPS as he targets a victory over two legs that would massively boost the coffers.

He's without Luke Byrne, who’s been ruled out for the rest of the season, while Evan Osam and Danny North are also injured. However Gary McCabe and Killian Brennan return from suspension.

"We've filled the players in. We've got plenty of information on them now. We don't have too many injuries at the moment.

"The big thing for the clubs in Europe is... the money for progressing is massive. If you win two games in Europe you win a lot more money than if you win a league title over 33 games.

"We want to stay in it as long as we can, but the financial issue is huge. Winning the game and going through makes things easier for all the teams involved I think.

"They're a decent side... but we go into it with confidence." 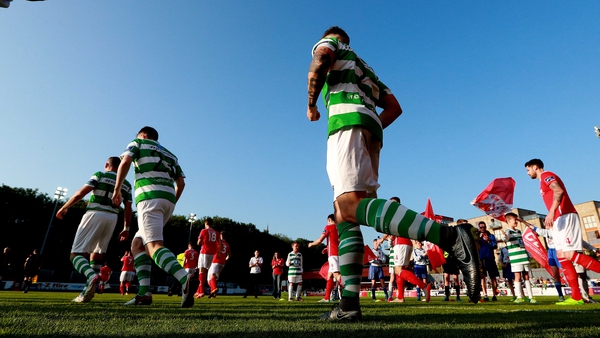