Frozen balls containing team names have been used to rig European soccer's club competition draws although the ruse was never used at FIFA, the former chief of the game's world governing body, Sepp Blatter, has said.

"Of course it's technically possible. That doesn't happen in FIFA but I witnessed draws, at European level, in which that happened, but never at FIFA," Blatter told Argentine daily La Nacion in an interview on their website.

"Of course you can make them stand out, heating them or freezing them"

Draws to decide which teams play each other are conducted by selecting the table tennis-size balls from plastic bowls. The balls are unscrewed to reveal the team names inside.

"You put the balls in the fridge. The mere comparison between them on touching them gives you cold ones and hot ones. On touching them you already know what you've got," added Blatter, who is appealing a six-year suspension from soccer at the Court of Arbitration for Sport.

"There was only one person who had that power (to fix draws) in Europe. Artemio Franchi did it for the draw in club tournaments," added Blatter, referring to the late UEFA president who was in charge of Europe's governing body from 1973 until he died in a road accident in Tuscany in 1983.

"Allegations that UEFA has in the past fixed draws for its competitions are completely absurd and therefore not worth a reaction," UEFA said in a statement on Tuesday.

Blatter, banned from all football-related activities over ethics violations amid the worst graft scandal in FIFA's history, also denied there had been a deal between himself and the late Argentine FA president Julio Grondona after Argentina's favourable draw for the 2014 World Cup finals in Brazil.

"The draw was clean down to the last detail. I never touched the balls, something others did. Of course you can make them stand out, heating them or freezing them," he said in the La Nacion interview published on Monday.

Argentina were drawn with Nigeria, Bosnia and Iran in Group F at the tournament in Brazil and went on to reach the final where they lost 1-0 to Germany.

Swiss Blatter, 80, was among dozens of FIFA officials brought down after revelations of years of corruption in the sport's world ruling body.

Blatter and Michel Platini, president of European soccer's governing body UEFA, were banned over a payment of 2 million Swiss francs  made by FIFA to the Frenchman in 2011, with Blatter's approval, for work done a decade earlier.

Both men have denied any wrongdoing. 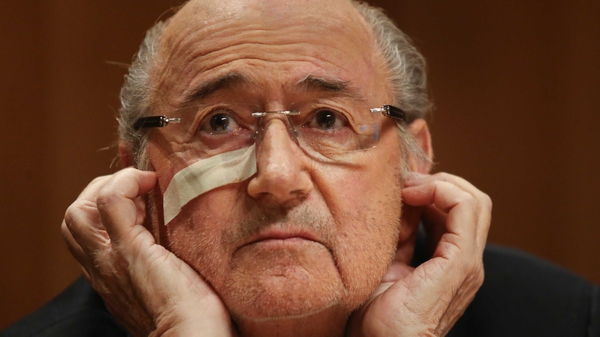 Sepp Blatter ready to 'defend' FIFA in US court