twLyle Taylor broke the deadlock at Wembley in the 78th minute before substitute Adebayo Akinfenwa sealed the win with a penalty in the 11th minute of injury time.

The Dons, formed as a phoenix club by its supporters in 2002 after Wimbledon FC relocated to Milton Keynes, have now been promoted six times and will start next season in the third tier - the highest level in their 14-year history.

Boss Ardley told Sky Sports: "It's wonderful. The occasion for our fans was good enough in the first place from where we've come from.

"I had a feeling that these boys were going to deliver and that second half there was only one team going to win that, we were outstanding.

"It's emotional, to win a game at Wembley and get promotion is wonderful but they (the fans) deserve it; they had their club taken away from them 14 years ago, now look at them."

Top scorer Taylor turned home Callum Kennedy's inswinging cross to put the Dons on course for Sky Bet League One before Akinfenwa wrestled the ball from designated penalty-taker Kennedy to send Luke McCormick the wrong way from the spot at the death after substitute Adebayo Azeez was tripped in the area by Jordon Forster.

Akinfenwa, who was told before the match that his Wimbledon contract would not be renewed for next season, said: "It's what dreams are made of, it's a beautiful feeling.

"I think I'm technically unemployed so any managers, hit me up on the Whatsapp and get me a job.

"We were the underdogs, so not only Leicester can do it, AFC Wimbledon can do it.

"There ain't no better way to leave this club than to leave them promoted, it's beautiful.

"Playing at Wembley, the hallowed turf, it don't get no better than that, I promise. All those who said I was too big to play football, come on now. Haa haa." 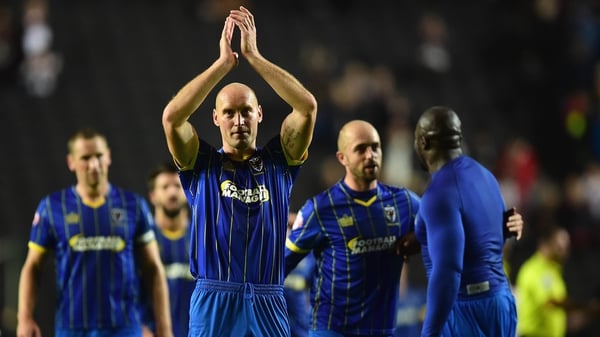