Hull secured a return to the Premier League with a deserved 1-0 defeat of Sheffield Wednesday in the Championship play-off final at Wembley.

The classiest of finishes from Mohamed Diame was rightly enough to earn promotion at the end of a season which for several reasons had threatened to unravel.

Consistent speculation surrounded the future of manager Steve Bruce, a poor run of form in the second half of the season and concerns surrounding their seriously-ill owner Assem Allam had all threatened their ambitions.

Diame's goal ensured it was Wednesday's hearts which were broken, however, cruelly ending the unlikeliest of challenges for promotion after a 16-year absence from the top flight and ensuring Hull, with the expected income that comes with reaching the Premier League, can consider themselves €225million richer.

Following a promising start in which free-kicks from Wednesday's Fernando Forestieri and Ross Wallace tested goalkeeper Eldin Jakupovic it was Hull's superior quality which exerted the greater influence.

Tom Huddlestone had already seen a powerful shot saved by Keiren Westwood when, in the 29th minute, Robert Snodgrass curled a left-wing corner to Abel Hernandez, whose header was chested off the line by Kieran Lee when it bounced off Michael Dawson and struck Lee's outstretched hand.

Referee Bobby Madley ignored Dawson's calls for a penalty but if Hull were disheartened, it did not show. First Diame's through-ball put Hernandez through on goal with Westwood from where the Ireland international produced an outstanding save to tip wide.

Then the midfielder ran through Wednesday's defence into space in the area, before from in front of goal sending a left-footed shot against the outside of the left post and out of play.

If observers were not already wondering why a team featuring players of the collective ability of Dawson, Huddlestone, Diame and Snodgrass was ever relegated 12 months ago, they received another reminder of Hull's strength shortly after half-time.

From a 53rd-minute corner, Snodgrass crossed to Dawson and the defender, with both time and space in front of goal, sent another powerful shot towards goal which Westwood again saved.

In what to most minds has been a romantic season, however, the fixture widely billed as football's richest was decided by a moment of true quality, demonstrating the obvious advantages money can buy.

Diame, a player with six years' Premier League experience, collected possession in a routine position in Wednesday's half in the 72nd minute before, from 25 yards, lining up a shot and masterfully curling beyond the excellent Westwood into the top-right corner.

The goalkeeper did well to even get his fingertips to the ball, but there was little he could do to stop it and Hull held out to secure their return to the Premier League. 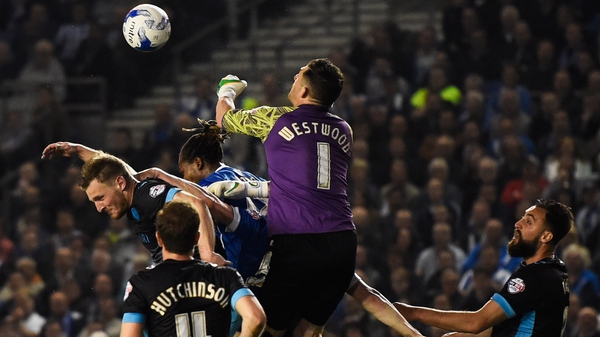