Ireland signed off at the Aviva Stadium with a 1-1 draw against the Netherlands after Shane Long’s first-half goal was cancelled out by Luuk de Jong’s late equaliser.

Martin O’Neill’s side put in a typically workmanlike performance to draw with the World Cup semi-finalists and took a deserved lead in the 30th minute as Long pounced from close range.

But the Dutch regained an element of pride with an 85th-minute equaliser as De Jong headed home from eight yards.

With days remaining to nail down his squad, Ireland manager Martin O’Neill named a side that was obviously designed to take a good look at several players on the fringe of his final 23.

And one of the men in the spotlight was midfielder Harry Arter, starting the game on the right side of a three-man midfield along with Glenn Whelan and Stephen Quinn, who was also looking to impress.

And the Bournemouth man was straight into the action, picking up the ball in the middle of the park and clipping a clever ball over the top, which put the retreating Dutch under pressure straight away.

A minute later, Arter was making his mark, and leaving his mark, with an early challenge on Dutch captain Kevin Strootman. 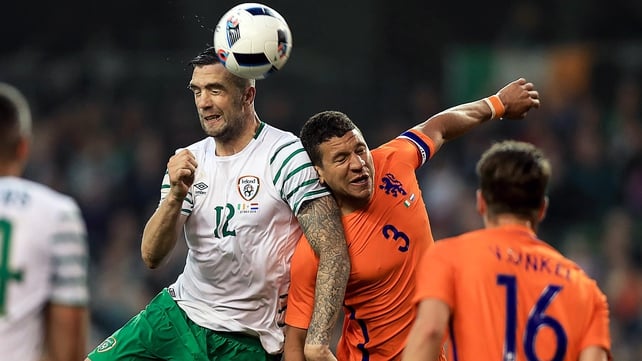 The perceived friendly nature of the game and the fact that the match was barely underway, allowed the referee to put the mis-timed tackle down to over-enthusiasm and left his cards in his pocket.

Despite the lively start, there was little action at either end with the Dutch enjoying possession without really threatening, and the closest they came to upsetting the home side came in the 10th minuteas Jetro Willems swung aclever ball in from the left; John O’Shea, however, was in the right position to head clear.

It took 18 minutes before the game got going as the energetic Quinn intercepted the ball on the half-way line and ran at the Dutch defence down the right flank.

With plenty of time to pick his cross, and with Jonathan Walters and Long arriving into the box, Quinn went with pace as he smashed the ball across the face of goal. The delivery, however, was just a little too high for the arriving Irish and the danger was cleared.

But only as far as the lively Arter who found space and took the ball in from the left to set up a sight at goal. But the midfielder’s right-footed effort was deflected allowing the keeper to make an easy save.

A good spell for the Irish continued and three minutes later Long was sent off down the left, before drawing a foul from Jeffrey Bruma who could not handle the Southampton striker’s pace.

Robbie Brady stepped up to deliver the set-piece – Ireland’s potential secret weapon at this summer’s Euros – and whipped a dangerous ball at pace but Jasper Cillessem read it well and punched clear, inadvertently setting up a Dutch counterattack.

Mempis Depay strode out of defence before rolling the ball to Vincent Janssen who burst into the Irish half, but there were green jerseys back tothwart the attack.

Ireland were finding their rhythm and enjoyed some good possession, passing the ball across midfield and bringing Seamus Coleman into the game down the right flank.

And the first corner of the game was won in the 30th minute, allowing Brady to prime another arrow into the danger zone. 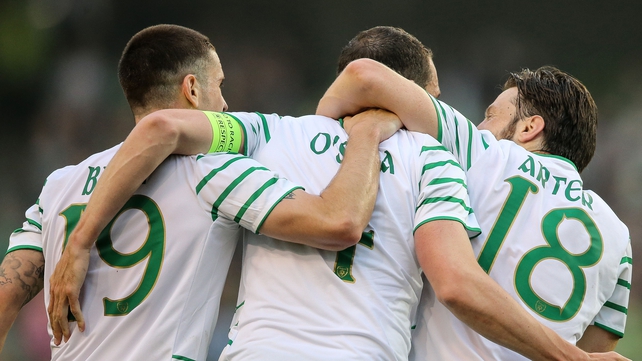 The pin-point cross was met by the head of O’Shea, who arrived late into the box and his powerful header was parried by the keeper, and then handled on the line by Janssen.

But while O’Shea ran off towards the officials, looking for a penalty, Long steamed into the six-yard box to flick the ball home and give Ireland the lead.

The Dutch looked to hit back in the 38th minute as Depay, who was changing between the right and left flank, found himself in space, before whipping a tempting ball across the Ireland goal.

Luckily for the home side, the ball eluded everyone and Darren Randolph, still without a save to make, watched the ball fly past his far post.

Ireland eased to the break with the only other thing of note being Arter finally picking up a caution for one too many over-eager challenges, this time on Manchester United’s Depay.

No changes at the break allowed the ‘trialists’ more time to impress the manager and David McGoldrick looked lively from the start, dropping very deep demanding the ball, and with some success.

And some good Ireland play led to another Brady set-piece, which was inches away from Shane Duffy’s head as Bruma did enough to prevent the Blackburn man in front of goal.

The ball sprayed wide to Walters who reacted quickly to guide a header on target but it was easy for the keeper.

A minute later, Long’s pace create something out of nothing down the left flank, winning another free-kick in a dangerous position.

Brady again delivered, this time low and hard and the ball ricocheted off the leg of Bruma who could only watch as it span just wide of the post.

Again Ireland kept the pressure on the Dutch goal and Duffy came a little closer with a towering header that flew over the bar, before Long had another chance, but was adjudged to have fouled the centre-half as he too could only send his header the wrong side of the crossbar.

The Dutch finally got a sight of goal in the 60th minute as Depay cut in from the left and drilled a shot goalwards. It may have tested Randolph but Duffy got across and the committed defender’s outstretched leg blocked the shot. 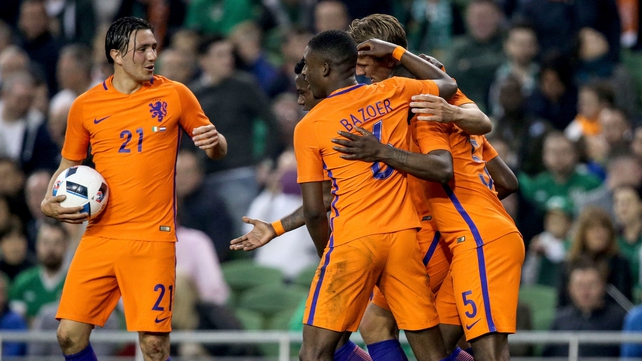 Right on cue the subs started to arrive and the crowd responded with an equally annoying Mexican wave.

With the game starting to lose shape, Randolph almost got himself into trouble in the 72nd minute as a poor left-footed cross was mis-kicked into the Dutch striker but he was lucky to see the ball fly wide.

Ireland responded with another well-hit set-piece and this time Duffy arrived at the near post but his glancing header lacked purchase and it flew wide.

Out of nothing, the Dutch equalised.

Willems arrived up the left flank with five minutes remaining to get on the ball and played an excellent cross in between Ireland’s two centre-halves, allowing substitute De Jong to guide his free header past Randolph who had got caught in two minds coming for the ball before stalling.

Ireland looked for a response and applied an element of pressure in the Dutch half with McClean’s enthusiasm putting pressure on the defence.

And with five minutes to play, substitute Eunan O’Kane, who had just replaced man of the match Harry Arter, managed to guide a snapshot on target but Cillessen got down well to save at his near post.

Four minutes of injury time allowed McClean just one more burst of pace at the retreating Dutch but there was to be no dream finish for the Irish who will settle for a well-earned draw from against this underperforming Holland side. 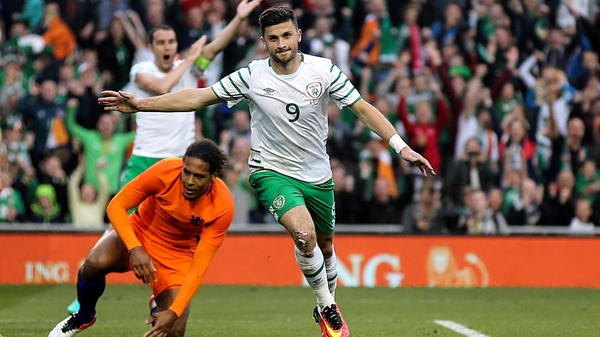 As it happened: Republic of Ireland v Netherlands Soccer