Hull reached the Sky Bet Championship play-off final but they did it the hard way with a 3-2 aggregate victory over Derby.

The Tigers had won the first leg 3-0 at the iPro Stadium but were beaten 2-0 in the second leg at the KC Stadium through two first-half goals, an early Johnny Russell strike and an Andy Robertson own goal.

Derby pushed for an equaliser but Hull held on to their narrow advantage to reach the final at Wembley against Sheffield Wednesday and keep alive hopes of an immediate return to the Barclays Premier League.

Knowing the odds were stacked against them, Derby began at a high tempo and took the lead after six minutes when Hull failed to deal with a cross to the back post from Cyrus Christie.

The ball was headed down by Chris Martin and Russell saw his first shot blocked but forced home the rebound from a couple of yards.

Ten minutes later, Russell curled a free-kick just wide as Hull continued to soak up pressure and it took 25 minutes for the home side to have a shot when Jake Livermore fired well over.

Livermore fouled Martin on the edge of the area and when Hull failed to clear the free-kick properly Craig Bryson shot narrowly wide.

Ten minutes before the break Derby got their second when a low cross from the left by Andreas Weimann was put into his own goal by Robertson from close range.

Hull had a penalty appeal turned down when Moses Odubajo went to ground and the same player saw his shot deflected wide for a corner as Derby continued to be solid at the back.

With the tie finely balanced both sides began the second half in search of the next goal, Derby being denied in a goalmouth scramble by some hurried Hull defending.

Abel Hernandez tried an ambitious shot from a tight angle which went wide across goal and Mo Diame also fired wide after bursting through the middle as Hull looked better at the start of the second half than they did in the first.

Derby looked composed in midfield but were not quite able to make the most of their possession, Will Hughes firing over after one period of concerted pressure and Martin then tested Eldin Jakupovic with a shot which the Hull keeper beat away with his fists.

Former Hull player Tom Ince drew a loud cheer from the home fans as he shot over as the hosts were once again pinned back deep in their own half.

In a rare Hull attack, Robert Snodgrass cut the ball back but Jason Shackell cleared for a throw as no Hull player was there to take the chance, speaking volumes of their preference for defence.

It was a risky tactic, but one which ultimately rewarded them with a play-off final spot. 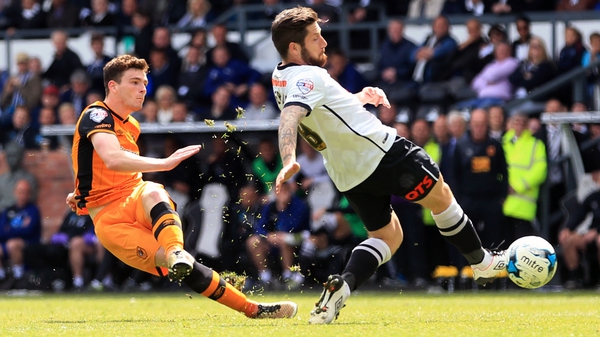