Rafa Benitez said his heart was telling him to stay as Newcastle United boss next season despite their relegation from the Premier League.

The Spaniard, who began the season in charge of Real Madrid, was hired by Newcastle in March to try and extricate them from the relegation zone, a feat he just failed to achieve.

Yet the Magpies finished on a high, thrashing third-placed Tottenham Hotspur 5-1 on Sunday and Benitez's name was sung by fans who see him as the man to guide them straight back.

He has a clause in his contract that says he can leave if Newcastle went down, but is in discussions with the club's owner Mike Ashley about making his stay long term.

"My heart is telling me yes, it is a great opportunity, city and club," Benitez told BBC Sport. "But my brain is saying to analyse what is going on."

Benitez said he has been impressed by the support he has received since taking over from Steve McClaren.

"I have been in football all this time. You want to be sure people love you and if you work hard that they recognise that you are trying your best and I have this here," he said.

"I knew that every day when I walk in the streets. Everyone is so positive and the atmosphere today doesn't surprise me too much. They were supporting for 90 minutes, I knew it would be like this and that is why I am so open to keep on talking.

"It's disappointing because we wanted to stay up, but the players gave everything. We can't change what has happened but we have to make sure that everything is fine for the future." 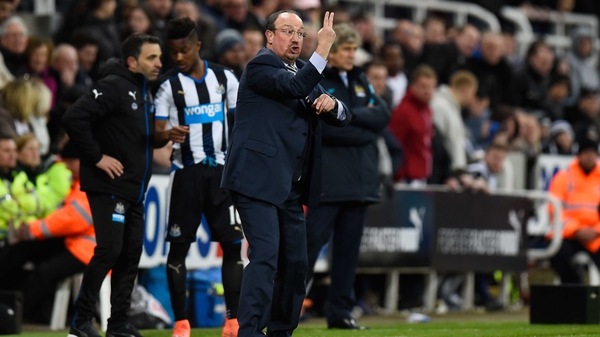