John Terry on Sunday spoke of his desire to stay at Chelsea, but did not declare whether or not he will be at Stamford Bridge next season.

The 35-year-old defender has made 703 appearances since his debut in October 1998, but was suspended for the concluding 1-1 draw with Premier League champions Leicester.

Terry, whose current contract expires on 30 June, has been offered a one-year contract extension and is considering the offer.

He addressed supporters following the contest, with the fans serenading the man they describe as 'Captain, Leader, Legend' on his potential farewell.

"We all want the same thing," said Terry, who was thrown aloft by his team-mates on a lap of appreciation following the match and his speech.

"For a very long time I've said I want to be here for the rest of my career. I want to finish my career here.

"We've had a few days of speaking to the club. I want to stay. The club knows that, the fans know that."

Terry in January said he would not be staying, but Chelsea insisted an offer may be forthcoming and it arrived this week.

The defender said it was for a "different role", hinting at reduced terms and without guarantees of a first-team place.

John Terry was lifted into the air by his Chelsea teammates after today's game! https://t.co/F7vGtLlMgr

Home supporters sang about Terry throughout, but banners were unfurled midway through the first half when 26 minutes were on the clock.

He acknowledged the adulation by beating the left side of his chest, over his heart and the club crest which adorned his t-shirt.

Terry endeared himself yet further to supporters when congratulating Leicester and Claudio Ranieri, the Foxes boss and his former manager.

"On a personal note I'd like to thank everyone. This has been very emotional," Terry added.

"Chelsea is my life, just like it is yours. You've been a big part of the best moments of my life in this stadium."
Hiddink was pleased Terry and Chelsea are now in contact over the new deal, but declined to speculate on the future.

The Dutchman said: "It's good when both parties start to talk. Personally I hope they manage to come to a solution. That is my personal opinion.

"He's still physically fit and mentally very fit, so he can contribute a lot wherever he wants to play."

Ranieri also paid tribute to Terry. The Leicester boss, who managed the defender in his formative years as a professional, said: "John Terry is like my son. I believed in him when he was young.

"I put him in the team when there were a couple of champions of the world and European champions, (Marcel) Desailly and Frank Leboeuf.

"He played, because for me it was better to put him in the squad. He made a fantastic career. I hope he can continue." 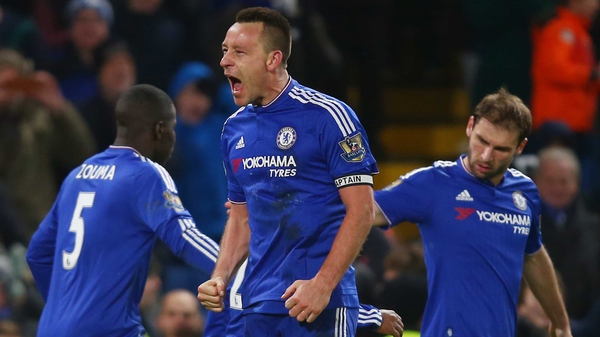