Leicester City's England striker Jamie Vardy has been named Premier League Player of the Season after his pivotal role in the club's remarkable title-winning campaign.

The East Midlands club, which announced the award in a tweet on Friday, defied the odds to lift their first top-flight crown having begun the season as 5,000-1 outsiders.

The prolific Vardy is also in the race for the golden boot awarded to the league's top scorer, having netted 24 goals so far, one behind his international team mate Harry Kane of Tottenham Hotspur with one round of matches remaining on Sunday.

The 29-year-old's Vardy's phenomenal form this season led to him winning his first England cap and he is certain to be included on Monday in Roy Hodgson's squad for next month's European Championship in France.

He was also voted Player of the Year by the Football Writers' Association (FWA), an award he received at a dinner in London on Thursday attended by manager Claudio Ranieri.

Vardy was named in the Professional Footballers' Association (PFA) team of the year but Leicester's Algeria international winger Mahrez won the PFA Player of the Year award. 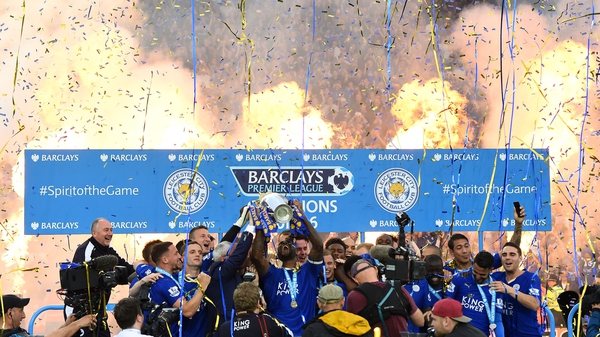