Liverpool have their eyes on a much bigger prize but stayed sharp enough to complete a routine 2-0 victory over Watford in the Premier League.

The Europa League final on 18 May looms over everything at Anfield despite manager Jurgen Klopp's insistence that they must continue to focus on finishing their domestic season.

In a campaign of change, the Premier League cannot offer them a route back into Europe's elite, but a win in Basle a week on Wednesday will and that is the basket into which the Reds are putting all their eggs.

Joe Allen, who scored the first-half opener, is unlikely to be a starter in Switzerland but Roberto Firmino, rested after his exertions in helping to overcome Villarreal on Thursday, will be and the Brazil international showed his importance by coming off the bench to wrap up the result with 14 minutes remaining.

Klopp made eight changes from the emotionally draining Europa League semi-final win, with goalkeeper Adam Bogdan recalled to the bench after Danny Ward's knee injury in training, which is likely to keep the Wales international out for Liverpool's last two matches but should not affect his participation in Euro 2016.

The changes undoubtedly had an effect on the game, although not as much as Red thoughts of Basle, or the happiness of Watford to coast towards the end of the season with nothing to play for.

For Liverpool, however, there are technically still Europa League final shirts up for grabs but even Allen, with his third goal of the season, and Benteke, who provided the assist for the opener, are likely to only be bit-part players in Switzerland. 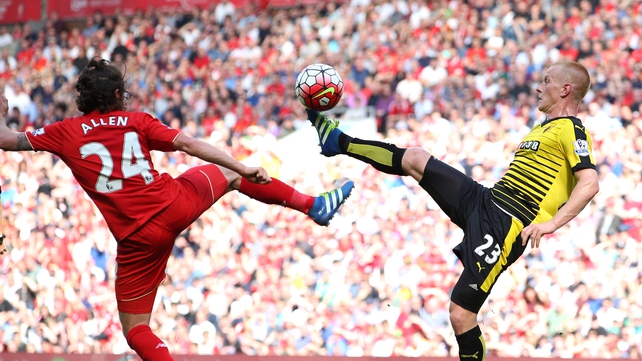 Once Liverpool withstood the energy of Watford's early attacking intent, with Odion Ighalo threatening on three occasions and Almen Abdi having two attempts, there was little threat offered by the Hornets.

The breakthrough came in the 35th minute when Kevin Stewart tapped a quickly-taken free-kick to Philippe Coutinho, one of the three players retained in the starting line-up, and the Brazilian lofted a pass onto the head of Benteke who knocked it down into the path of the on-rushing Allen to slide home.

Coutinho should probably have made it 2-0 just after the break but failed to get a decent connection on Benteke's cross, and although Ighalo forced Simon Mignolet into a good save after midfielder-turned-centre-back Lucas Leiva's mistake it still seemed Liverpool were the most likely to prevail.

That was confirmed when Firmino, on as a substitute on the hour, picked up a loose ball from Sheyi Ojo's block, advanced unchallenged and unleashed a shot to which Heurelho Gomes got a hand but could not keep out.

Benteke's bungled header over the crossbar from three yards out in the dying moments showed why Daniel Sturridge, given a 90-minute rest on the bench after scoring in midweek, will be Klopp's main man in Basle. 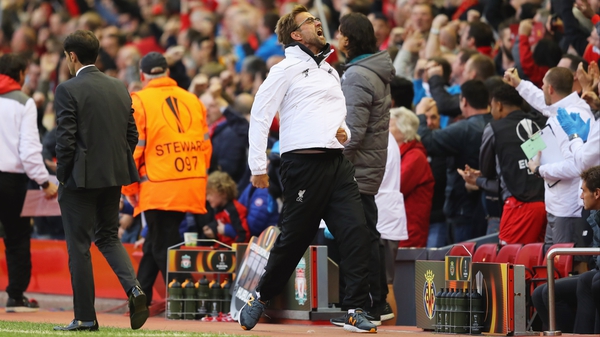