Celtic frontman Leigh Griffiths has been crowned PFA Scotland player of the year for the first time.

The Hoops striker collected the prize at a glittering dinner ceremony at Glasgow's Hilton Hotel.

His triumph came just a day after he struck his 39th goal of an impressive campaign as the Parkhead side effectively wrapped up their fifth straight title with a 3-1 win at Hearts.

Rangers boss Mark Warburton was named manager of the year after leading the club back into the top flight in his maiden campaign, while Celtic defender Kieran Tierney took the young players' prize.

Griffiths' success is the second time in four seasons he has been recognised for his individual efforts after collecting the Scottish Football Writers' Association's top prize as well as the union's young player award following a 28-goal campaign with former club Hibernian back in 2013.

He was up against Dundee duo Kane Hemmings and Greg Stewart as well as Aberdeen's Republic of Ireland winger Jonny Hayes but becomes the third Celt in as many years to lift the award following Kris Commons and Stefan Johansen.

Griffiths' Celtic colleague Tierney was also celebrating as the unflappable 18-year-old capped off an fine debut term by lifting the Young Player of the Year trophy.

Tierney was the only top-flight candidate up against Rangers' Barrie McKay as well as Hibs pair Jason Cummings and John McGinn, but he was the stand-out performer.

The Isle of Man-born teenager has been a virtual ever-present in Ronnie Deila's line-up since ousting Honduras international Emilio Izaguirre from the left-back slot last December, with his contribution even earning him a first Scotland cap in March's 1-0 friendly victory over Denmark.

Meanwhile, the Championship player of the year award went to Rangers captain Lee Wallace, who has led by example with a series of outstanding displays for the league champions. 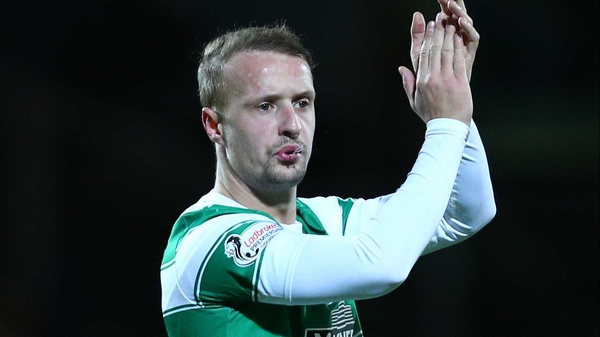