Deeney, a boyhood Birmingham fan, stuck the knife into the team he loves to score against more than any other as Watford ran out 3-2 winners.

Relegated Villa were leading with just five seconds of normal time remaining thanks to goals from Ciaran Clark and Jordan Ayew, either side of Almen Abdi's free-kick.

But the beleaguered midlanders, who had Aly Cissokho sent off with 15 minutes left, could not hold out as Deeney's double piled on the agony.

The match initially settled into a miserably familiar routine for Villa, camped in their own half while being jeered by their own fans.

Watford striker Odion Ighalo, playing despite the death of his father last weekend, could have twice opened the scoring but for a block by Joleon Lescott and a sharp near-post save from Mark Bunn.

Hornets midfielder Ben Watson was then denied a goal-of-the-season contender when he flicked the ball up some 30 yards out and launched a dipping volley which crashed against the crossbar.

However, after 25 minutes Villa made it into the Watford half, and even managed a shot at goal.

Although Ayew's effort was way off target the away fans launched into a mock celebration as if they had scored. 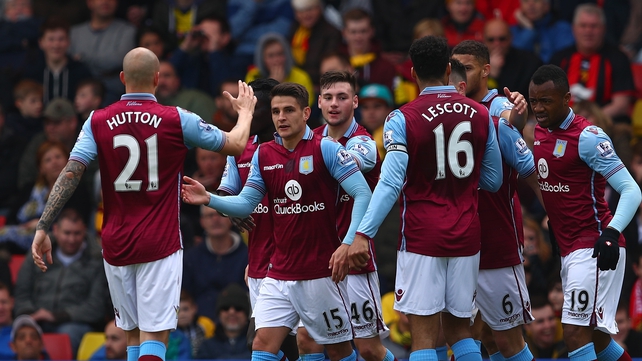 So imagine their surprise two minutes later when Ashley Westwood swung in a corner and Clark nipped in ahead of Miguel Britos to power a header into the net.

For the first time since February Villa were leading a match - and they almost doubled their advantage when Cissokho's cross was headed onto the foot of the post by Ayew.

Instead normal service appeared to have been resumed when Abdi curled in a superb free-kick to level on the stroke of half-time.

Yet three minutes into the second half Villa scored again, Ayew exchanging passes with Rudy Gestede before drilling a low shot from the edge of the box past Heurelho Gomes.

Moments later Gestede should have made it three when he was played in by Westwood, but the big striker blazed his shot over from six yards out.

Watford came close to equalising for a second time when Deeney headed goalwards from a corner but Westwood was on hand to hack the ball off the line.

Villa were reduced to 10 men when Cissokho saw red for tripping Ikechi Anya as he raced through on goal.

But they were moments away from registering only their second away win of the season until Deeney nodded in a Steven Berghuis cross.

And in stoppage time Deeney lashed home a half-clearance from the edge of the area to leave Villa with an unwanted place in the history books. 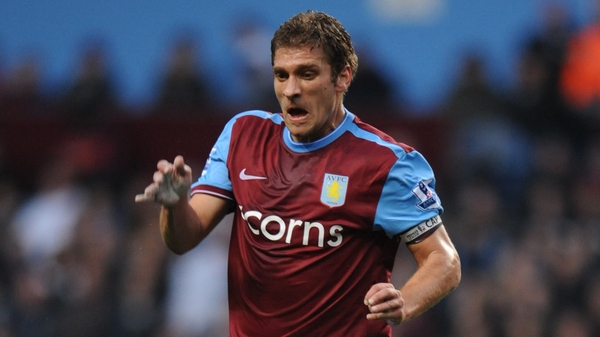