By David Goulden at The Brandywell

Raffaele Cretaro and Jimmy Keohane struck in either half as Rovers reversed the result between the two teams in the EA Sports Cup just two weeks ago.

Derry came into this game one the back of a one hundred percent home league record following wins over Cork, Galway, Shamrock Rovers and Bohemians. But it was the away side who were responsible for the early chances.

Regan Donelon's threaded through ball down the Sligo left sent the industrious Liam Martin through one-on-one with City goalkeeper Gerard Doherty with five minutes played. The Rovers winger could only smash his low effort into the legs of Doherty who stood strong to deny Martin his second league goal of 2016.

Sligo centre half Mick Leahy found himself unmarked as he rushed to meet John Russell's corner two minutes later. The former Limerick man wastefully nodding the ball past Doherty's near post, much to his own disgust.

Cretaro made his 450th competitive appearance for the Bit O'Red on the night. He was presented with a wonderful opportunity to mark the occasion on 24 when he latched on to Martin's through ball. Doherty again thwarting Sligo as he was equal to Cretaro's attempted chip.

Micheál Schlingermann was comfortable in keeping out Rory Patterson's strike on 25 as the Candystripes struggled to make an impact from attacking positions.

Cretaro continued to pose questions to the Derry back four and was not to be denied two minutes later as Rovers took the lead.

Craig Roddan's free from the left drifted over the grasp of two City defenders before Cretaro headed the ball between Doherty and the back post for his second goal in as many outings. 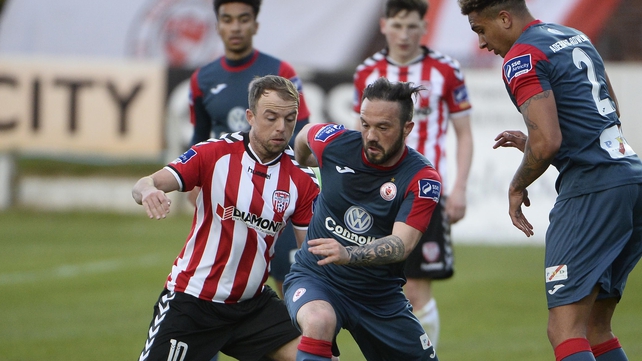 Barry McNamee could only drag wide, his effort from the edge of the Rovers area after Patterson and Niclas Vemmelund combined on 52. While Doherty was left dazed as he awkwardly fisted to safety, Cretaro's speculative effort from distance moments later.

City continued to struggle to threaten the Sligo rearguard although substitute Ronan Curtis almost levelled proceedings just past the hour mark. Conor McDermott, Conor McCormack and McNamee all playing their part in the build up as Curtis' effort from the angle fizzed past Schlingermann's post.

Martin should have doubled Sligo's lead on 65. Russell saw his shot come back off the woodwork as possession fell to the foot of Martin who could only crash the ball against Doherty's crossbar from point blank range.

Rovers did pull away four minutes later as Keohane netted his first goal for the club. The 25-year-old muscling his way past two Derry challenges before placing the ball, left footed past Doherty from ten yards. 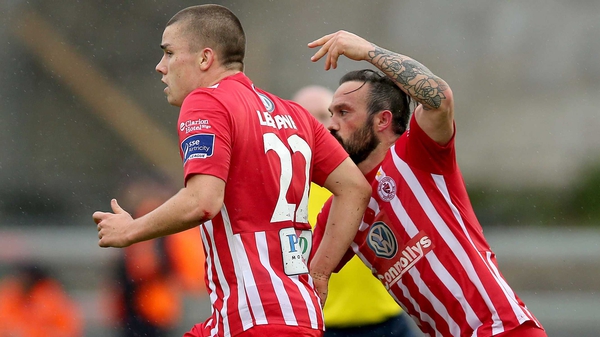