Andy Carroll and Mark Noble were on target as West Ham kept their chances of a top-four finish alive with a 3-1 win over Watford.

Carroll hit in his sixth goal in six games and Noble tucked away two penalties to move the Hammers to within four points of fourth-placed Arsenal.

The duo are likely to be overlooked for England's Euro 2016 squad this summer, but they could still be embarking on a European adventure with West Ham next season instead.

They could hardly have asked for more obliging opposition, though, with Watford safe from relegation and gearing up for Sunday's FA Cup semi-final.

The Hornets clearly had one eye on their Wembley meeting against Crystal Palace with boss Quique Sanchez Flores making seven changes.

Yet they still pulled one back through Sebastian Prodl and had a late penalty of their own saved before striker Nordin Amrabat was sent off in injury time.

In a one-sided first half West Ham took the lead in the 11th minute when Dimitri Payet cut inside from the byline and curled the ball perfectly for Carroll to steer past Heurelho Gomes with his left shin.

They should have been home and hosed long before Noble struck the second, but Carroll headed narrowly over, Payet twice shot over the crossbar and Gomes saved well from Diafra Sakho. 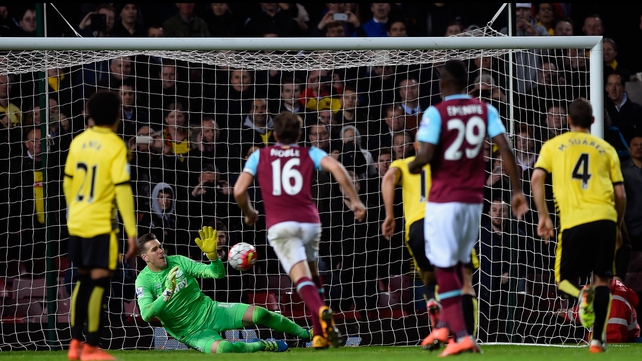 West Ham had been growing increasingly annoyed at having been awarded just one penalty all season before Sunday's stormy draw at Leicester, but they have now been given three in two matches.

Referee Mike Dean first pointed to the spot in the 45th minute after Jose Holebas climbed all over Cheikhou Kouyate as they contested a high ball in the area.

Gomes memorably saved two penalties from West Brom's Saido Berahino on Saturday, but was unable to record a hat-trick as Noble sent him the wrong way from the spot.

Manuel Lanzini then missed a sitter to make it three in first-half stoppage time when he sliced Sakho's cross wide from eight yards.

Watford could have hauled themselves back into the match eight minutes after the interval, but instead a nightmare 60 seconds for midfielder Almen Abdi put West Ham out of reach.

In a rare Hornets attack Abdi slid in to meet Jose Manuel Jurado's cross six yards out but somehow sent it over the crossbar.

Moments later the Switzerland international was back in his own area, where his clumsy foul on Michail Antonio gifted Noble his second and West Ham's third .

Prodl volleyed home a consolation from a Steven Berghuis cross in the 64th minute, and in stoppage time Dean awarded a third penalty of the night when Angelo Ogbonna grappled with Prodl.

However, Adrian saved substitute Troy Deeney's spot-kick and moments later Amrabat saw his hopes of a Wembley appearance ended by a second yellow card for a foul on Winston Reid. 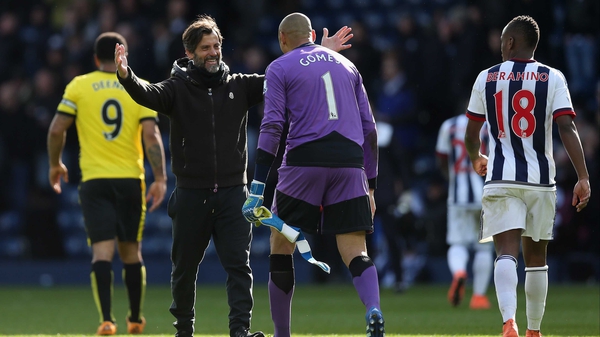