They may be on their worst domestic run of results in 13 years, but defender Gerard Pique is convinced Barcelona will retain their La Liga crown.

Defeat by mid-table Valenica consigned the Catalans to their third successive defeat and having enjoyed a nine-point lead over Atletico Madrid, they find themselves level with the side that dumped them out of Europe.

"If we play like this we'll win the league, I'm convinced of that"

Arch-rivals Madrid are now just a point behind Luis Enrique’s side but former Manchester United defender Pique says there are positives to be taken from the unexpected reversal at home to Valencia.

"We can't be worried when you look at the way we're playing," he said.

"If we play like this we'll win the league, I'm convinced of that," added Spain centre-back Pique.

"Although it's a step backwards, playing this well will help the team mentally. We've recovered the sensations from a month ago."

Madrid were the first team to beat Barca in 39 matches when they won 2-1 at the Nou Camp and since that they have lost to Real Sociedad and Valencia to add to their Champions League exit.

They have just five league games remaining as well as a Copa del Rey final against Sevilla next month and Enrque admits they need to pick themselves up quickly.

"Feeling sorry for ourselves we won't win anything," he told reporters.

"I think we have criticised ourselves when it has been necessary, but today is not a day to criticise my players, it is a day to congratulate them," he added after Sunday's game.

"In the second half the players gave a lesson in how to face a situation like this. Until the 93rd minute they were trying to equalise and that is something to highlight.

"We've got a marvellous challenge. If we win the five games remaining we will be champions. If there is a team capable of doing it - and much more given what they have done - it is this Barca." 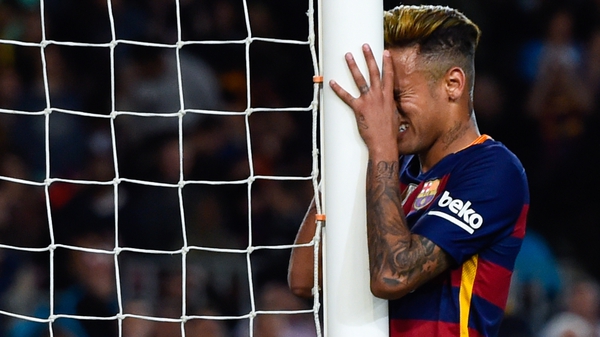