Aston Villa succumbed to the inevitable as defeat at Manchester United confirmed relegation after 28 years in the top flight.

Four managers, three wins and two chief executives was how one banner concisely summed up an atrocious season for the fifth most decorated club in English football history.

Temporary boss Eric Black's side never looked like securing the win that would temporarily stave off relegation, with the gallows humour from Villa's considerable away support all that lit up a turgid first half until Antonio Valencia picked out Marcus Rashford in the 32nd minute.

The 18-year-old's seventh goal in the first 12 matches of his senior career proved decisive as Louis van Gaal's men failed to add extra gloss to a win that kick-started their top-four push, just days after reaching the FA Cup semi-finals.

The visitors went close to an unlikely point as substitute Rudy Gestede struck a late volley off the post, but they were unable to find the net as Villa's return to the second tier for first time since 1988 was confirmed.

Considering their predicament, an impressive number of fans made the trip to the north-west, where they certainly made their voices heard.

Jordan Ayew's early wayward strike drew cheers and chants of 'we are staying up' from the raucous away support - an understandable approach as they awaited the hosts' opener.

A strike from Kieran Richardson and Ayew's blocked effort were the only other efforts Villa could muster as Van Gaal's men dominated the first-half possession, with Marcos Rojo and Marouane Fellaini missing the target with early headers.

Rojo saw a flick blocked by Joleon Lescott and the former England centre-back then swung wildly at a cross from Rashford, with the ball going just wide of Brad Guzan's goal.

A mazy Juan Mata run was followed by a sliced effort embarrassingly wide as United attempted to transform their dominance into a shot on target, never mind a goal.

It took 32 minutes for the hosts to get an effort on Guzan's goal, but when they did Rashford made it count. 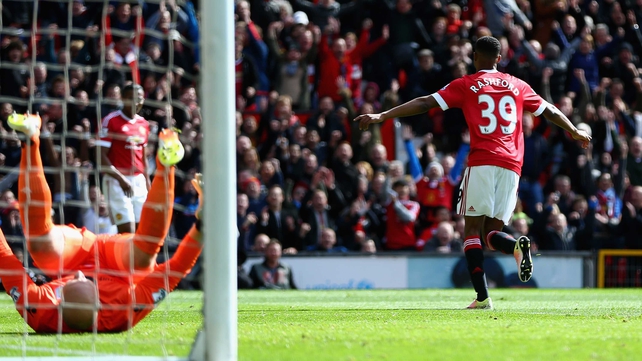 The teenager intelligently hung back outside the six-yard box, sweeping home a low Valencia cross.

Rashford was at the heart of things when play resumed, almost drawing a spot-kick off Alan Hutton and then striking wide of the near post.

Mata stung Guzan's palms from a quickly taken corner and Depay failed with another free-kick, before Rooney was withdrawn after a solid 66 minutes on his first Untied start since February 13.

Another clever corner gave Mata a chance at the near post, only for his cross-shot to evade his team-mates as the match edged towards completion.

There was nearly a late twist as Villa belatedly kicked into gear, with a crucial Daley Blind tackle on the recently introduced Gestede prevented him turning home a late leveller.

The Benin international went close again moments later as he met Ashley Westwood's corner with a wonderful volley that rattled the post.

Ciaran Clark forced David de Gea into a save as Villa threatened to level, although Depay saw an effort deflected onto the post in stoppage time. 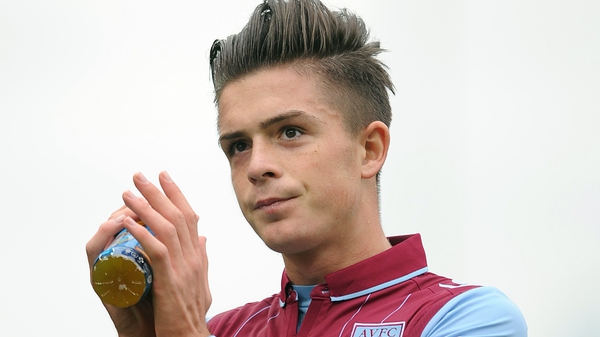