Hibs striker Jason Cummings dramatically dinked a Panenka-style penalty over the bar in the first half and Logan made a series of fine saves during a mostly dull, goalless 120 minutes.

Former Leicester keeper Logan, in for the suspended Mark Oxley, saved spot kicks from Blair Spittal and Billy McKay with Cummings rehabilitating himself with the winning penalty.

Paul Dixon and Guy Demel scored their penalties for United while John McGinn, Paul Hanlon and Martin Boyle also scored for Hibs who play the winner of the Rangers versus Celtic semi-final which will take place at the same venue on Sunday and will surely throw up no greater a story that that of Logan?

The 29-year-old stopper's last game was for Rochdale in December, 2014 and he cut a bulky figure in the Hibees goal but he made two crucial saves in the first half.

The first came in the 23rd minute when United striker Billy Mckay forced his way past Hanlon after fellow Hibs defender Darren McGregor miscued a header but the Hibees debutant came out to block the shot with his leg.

However, Cummings had an even better opportunity in the 28th minute when referee John Beaton pointed to the spot after Fraser Fyvie's cross from the left hit defender Coll Donaldson's arm inside the box.

There were cheers of relief from the United fans, though, when the Easter Road striker, with 23 goals this season, chipped his penalty then watched in horror as it cleared the bar. 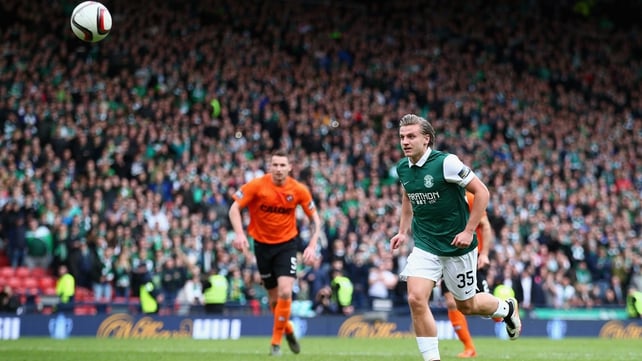 Two minutes from the break Logan came to Hibs' rescue again when Hanlon hesitated at a long, hopeful ball from Kyle Knoyle, allowing Mckay in again but the Hibs keeper made another close-range save.

Again it was Logan who was called into action just before the hour-mark with a decent save from a Chris Erskine drive, which gave some encouragement to the Tannadice fans.

Five minutes later, as the Taysiders swarmed around the Hibs box, Hanlon had to head clear off the line after Ryan Dow's shot deflected off McGregor and spun towards goal.

United's Guy Demel and Henri Anier came on for Donaldson and Erskine with Hibs' Farid El Alagui and Boyle on for Stokes and Liam Henderson but neither side could fashion a clear-cut chance before extra-time ensued.

Chris Dagnall replaced injured substitute El Alagui in the 95th minute before Logan dived down low to his left to push a John Rankin drive past for a corner, which came to nothing, after which he denied Anier.

Cummings forced a save from United keeper Eiji Kawashima with a drive at the start of the second period of added time before notching the winner in the dramatic penalty shoot-out, by which time Conrad was already a Hibs hero. 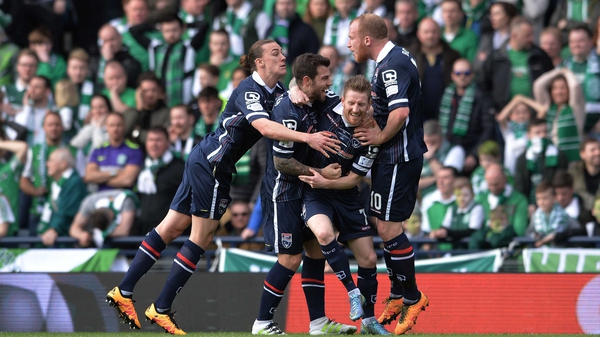