Defeat for the Black Cats would have left them seven points adrift of Norwich and safety, with boss Sam Allardyce facing the drop from the Premier League for the first time in his career.

But Borini's first-half penalty and second-half strikes from Defoe and Watmore means Allardyce has reeled in the Canaries to within a point - and his side have a game in hand.

These two clubs play for the Friendship Trophy whenever they meet, a tradition stemming back from the 1985 League Cup final between the sides.

But there was nothing remotely amicable about this clash, with tempers boiling over virtually straight from the kick-off.

Sunderland goalkeeping coach Adrian Tucker immediately grabbed Brady before players and staff from both sides squared up in front of the dug-out. 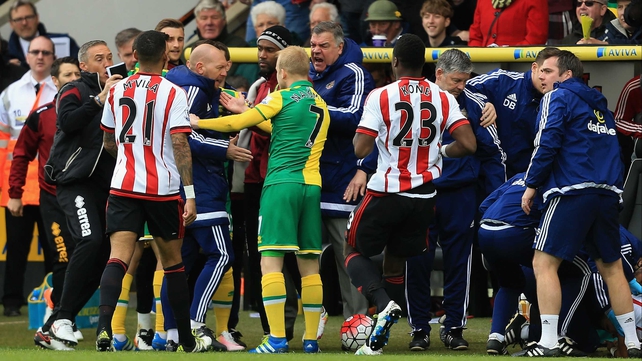 Allardyce was in the thick of the melee, shoving Norwich midfielder Jonny Howson and substitute Cameron Jerome in ugly scenes which will likely land both clubs an FA charge.

The two teams had more pressing concerns, though, and a football match eventually broke out, with chances at either end in a frantic opening half.

Norwich striker Dieumerci Mbokani's header from Brady's cross was saved by Vito Mannone, who also kept out Martin Olsson's 30-yard volley and prevented Younes Kaboul from slicing into his own net.

For Sunderland, Borini lashed a shot across goal and wide and Lee Cattermole skied a close-range chance.

But the breakthrough arrived four minutes before half-time when Andre Wisdom caught Borini in the area.

Wisdom got a slight touch on the ball but also took a chunk of Borini's ankle and was shown a yellow card before the Italian coolly converted the penalty low into the left corner.

Norwich were a whisker away from an equaliser when half-time substitute Nathan Redmond let fly from 20 yards only to hit the foot of a post.

Instead Sunderland grabbed the killer second in the 53rd minute, after Jan Kirchhoff brushed off Sebastien Bassong far too easily and fed Borini down the right.

Borini pinged a perfect low ball across goal and Defoe arrived at the far post to tuck away his 16th goal of the season.

Norwich's frustration grew when Younes Kaboul appeared to bring down Mbokani in the area, but Marriner waved play on.

Sunderland skipper Cattermole then came to the fore with an amazing double goal-line clearance to deny Mbokani and then Wes Hoolahan with the follow-up.

And the visitors sewed up the victory in stoppage time when Sebastian Larsson played in Watmore for a simple finish past John Ruddy.

Allardyce now has his survival fate firmly back in his own hands, while City have been dragged right back into trouble. 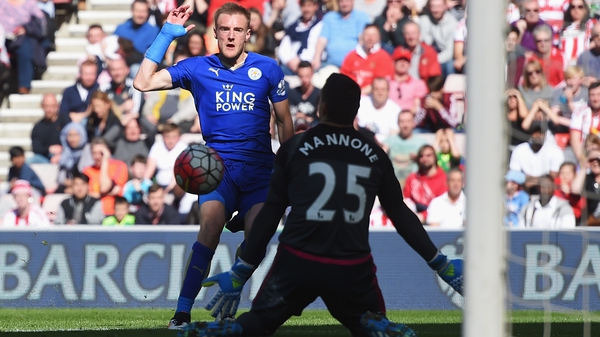