Sunday's 2-0 victory at Sunderland, coupled with Tottenham's 3-0 win over Manchester United, means the Foxes are guaranteed a top-four finish and at worst, a qualifier to join European football's elite next season.

The Foxes, however, have far loftier aims with three more wins enough to claim the title and if they manage to do that, Vardy's goals - he collected his 20th and 21st of the season on Wearside - will have played a major part in their success.

Ranieri said of the England international: "I am very, very happy because in the last weeks, he didn't score, but he gave very great assistance to his team-mates and the team-mates scored goals.

Leicester's rise has been nothing short of remarkable, but Ranieri is refusing to take anything for granted with both an automatic Champions League spot and the biggest prize still tantalisingly beyond his side's grasp with five games remaining.

He said: "Look, this is an amazing season for us, for our fans, for our chairman, for me, for everybody because our goal was be safe, and that is okay. The next, I said arrive in the Europa League, and it's done. Now we have the Champions League very close to us. 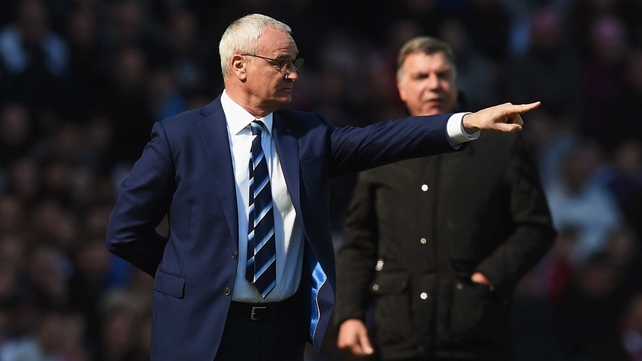 Vardy's finishing was the difference in a tight game which remained in the balance until the 66th minute, when the England striker ran on to Danny Drinkwater's defence-splitting pass and beat keeper Vito Mannone.

Sunderland substitute Jack Rodwell should have levelled with eight minutes remaining, but missed the target, and Vardy pounced once again deep into stoppage time after brushing Patrick van Aanholt off the ball and rounding Mannone.

Black Cats boss Sam Allardyce was once again left to bemoan the lack of a cutting edge which has cost his side dearly in recent weeks, and next weekend's trip to Norwich could prove pivotal in their fight against the drop.

Allardyce said: "Don't lose at Norwich, don't lose - they are seven points clear if we lose with five games to go. It still wouldn't be mathematically certain, but it starts heaping too much pressure on.

"We'll try to win, but make sure you don't lose because don't forget, we have still got a game in hand."