Ronan Finn netted a hat-trick as Dundalk returned to the summit of the SSE Airtricity League Premier Division with a comfortable 4-0 win over Longford Town at City Calling Stadium.

The away side were in command throughout and cruised into a two goal half-time lead courtesy of a Finn penalty on eleven minutes coupled with a Brian Gartland header on 23 minutes.

Finn claimed his second on 78 with a well taken close range finish before completing his hat-trick three minutes from time. The win sees the Lilywhites top by virtue of a superior goal difference.

Stephen Kenny's charges dominated from the off with Finn and Daryl Horgan both testing Town goalkeeper Paul Skinner early on.

Dundalk went ahead on the 11 minutes from the penalty spot. Kaleem Simon tripped Lilywhites full back Sean Gannon inside the Longford area and Finn made no mistake from 12 yards as although Skinner guessed right, he was unable to get behind the Dundalk playmaker's powerful spot kick.

Simon was offered the chance to atone for his error moments after the restart during a rare Longford attack. Peter McGlynn did well to bring the ball around Dane Massey but Simon was unable to steady himself in time to convert the winger's low cross from the right as his weak effort deflected off Brian Gartland.

The league and FAI Cup holders went within inches of doubling their lead twice in the space of one minute. With 20 minutes played, Daniel O'Reilly, a late replacement for Jamie Mulhall who was injured in the warm-up, upended Darren Meenan and Horgan's resulting free kick from 20 yards came back off the woodwork with the Town net minder all but beaten.

Meenan's rasping drive from the edge of the box suffered a similar fate during the next attack as the ball bounced back off the outside of Skinner's near post.

It remained all one-way traffic and the Dundalk pressure told again on 23.

Gartland managed to shrug off the attentions of his marker before nodding Meenan's corner past Skinner for his second league goal of the season. The strike was also the Oriel Park outfit's 1000th Premier Division goal.

The onslaught continued as Andrew Boyle went close with a header from a Meenan free on the half hour. While Horgan and Meenan combined to set up Kilduff who was denied by a strong Skinner save six minutes from the break.

Finn's robust effort sailed over the Longford crossbar on 51 as the away side sought to put the tie beyond doubt. A strong last ditch tackle from Town centre half Noel Haverty denied David McMillan after the former Sligo striker did well to control Gartland's long ball from the back on 56.

Gary Rogers remained a mere spectator from the Dundalk goalmouth as his side netted their third 12 minutes from time. Having received possession down the line from Horgan, McMillan skipped by a Longford defender before squaring for Finn who slotted past Skinner for his brace.

The former Shamrock Rovers man completed his hat-trick on 87. Josh O'Hanlon cleared Horgan's initial effort off the Town line before the ball fell to Finn who rifled the ball into the top corner. 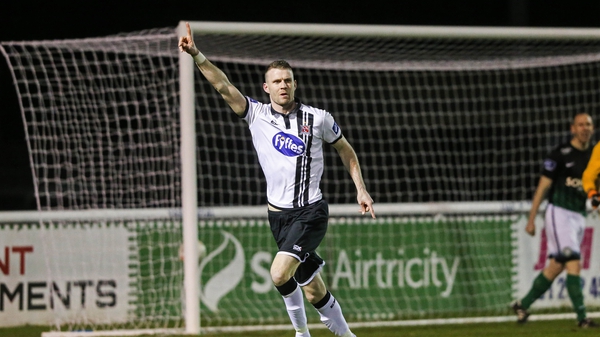