Shamrock Rovers boss Pat Fenlon said his side lacked "guts and character" as they slumped to a 3-0 defeat at Derry City on Friday night.

The Candystripes went top of the SSE Airtricity Premier Division tree thanks with a comprehensive victory over Rovers at the Brandywell, and a fuming Fenlon said their lacklustre performance was unaceptable.

“Performance? We didn’t have one," said Fenlon. "Derry were well worth the win, I thought they were very good. We were very poor.

“We never started the game. They bullied us too easy in the first half. I’m disappointed for the supporters who travelled, we let them down and that’s not good enough.

"We just didn’t show enough guts and enough character. Derry were first to every ball. The one thing that should be a given in any team is that you show up, you fight first and the best team wins after that.

“You don’t want to take away from Derry either. I thought they were very good.  We have to give them a lot of credit as well.

"The one thing that should be a given in any team is that you show up, you fight first and the best team wins after that" - Pat Fenlon

Ronan Curtis and Harry Monaghan struck had Derry two up within opening quarter, before Rory Patterson capped his 100th appearance for the club with a second-half penalty to seal the points.

It was a display teeming with energy, desire and quality that had manager Kenny Shiels beaming from ear to ear.

"It’s getting near to how I want us to play," he said. "The performance and the outcome was much closer to where we want to be. It was a really good collective effort from the players.

“Rovers will be there at the end of the season up at the top of the table. We have to respect the quality that they have. We deserved to win tonight, but don’t rule out Shamrock Rovers. They’ve a good manager and a good team.

“The ball retention was good. The combination play was good. The preparation and organisation and the way we set up to play I thought was very, very good. The biggest thing for me in footballers is having humility and respect and they showed that in abundance. They deserve a pat on the back.” 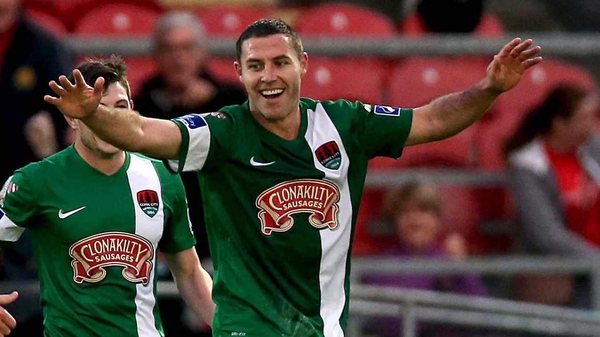