Harry Kane rescued a point for Tottenham in a 1-1 draw at Anfield but that may not be enough with leaders Leicester handed the incentive to take a decisive step in the title race.

Second-placed Spurs only closed the gap to the top to four points and that could be seven with six matches to go if the Foxes beat Southampton on Sunday.

Liverpool manager Jurgen Klopp had challenged the visitors to come to Anfield and win to keep their chances alive and although they showed commendable spirit after falling behind to Philippe Coutinho's 51st-minute goal - his third in consecutive club matches - they could not completely turn around the result.

Kane's sixth in the last four Premier League matches set a new club Premier League record of 22 in a season but individual accolades will count for nothing if they fall short in their ultimate quest.

It was not for want of trying with a determined second-half effort after the brilliance of goalkeeper Hugo Lloris had kept them in it before the break.

Spurs have the best away defensive record in the league and Lloris showed why he has been such a key component of Tottenham's title bid with five key saves in a first half which took 20 minutes to spring into life.

His best was probably the fingertip stop as he was falling to the floor to deny Adam Lallana for a second time in as many minutes, having earlier reacted quickly to stop his own team-mate Heung-Min Son beating him at his near post from Alberto Moreno's deflected cross.

The France international should not have been given a chance by Daniel Sturridge when Emre Can dispossessed Son and Philippe Coutinho threaded through the pass but the England striker drove straight at the goalkeeper in the best chance of the opening 45 minutes.

How the first half ended goalless remains a mystery as for all Lloris's heroics at one end Liverpool's defence was shaky at best at the other with Mamadou Sakho totally out of kilter.

Christian Eriksen's early shot was parried by Simon Mignolet, whose misunderstanding with Dejan Lovren almost saw Kane score from a rebounded clearance which dropped over the crossbar.

Kane fired wide after Sakho lost possession on the halfway line and was denied by a good Lovren block with Dele Alli's dipping volley comfortably held by Mignolet. 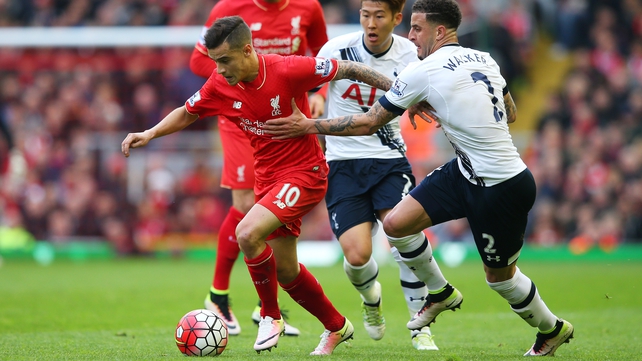 Lloris was finally beaten six minutes into the second half when Coutinho exchanged passes with Sturridge before carefully placing a shot beyond the reach of the goalkeeper, then trying to return the favour with a delightfully floated cross which Sturridge could only head over.

Spurs' response was exactly what was to be expected of title contenders and for the remainder of the game they were the better team.

Son volleyed wide a good chance having escaped the attention of Moreno before Kane showed him how it should be done with a precision strike on the turn inside Mignolet's far post from Eriksen's clever pass.

Mignolet was tested by Eriksen as the visitors upped the frenetic tempo even further - both teams pressed each other so hard in midfield throughout there were numerous turnovers and mistakes - with Coutinho's low cross drilled along the goalline evading everyone before he fired a shot wide.

Spurs must now sit and anxiously await Leicester's reaction while Liverpool head to Dortmund in midweek to face Klopp's former club in a Europa League quarter-final.