Kevin De Bruyne returned from injury to get Manchester City's Champions League push back on track as they thumped Bournemouth 4-0 at the Vitality Stadium.

Fernando, De Bruyne and Sergio Aguero struck to put City 3-0 ahead and end the contest inside 20 minutes, before Aleksandar Kolarov blasted a fourth at the death.

The 24-year-old Belgium star, who will face Ireland at Euro 2016 in France this summer, offered the pivotal contribution in his first outing since suffering a ligament injury in late January.

Pellegrini's side all-but slipped out of the title race with five defeats in eleven matches in all competitions since the 1 February announcement that Pep Guardiola would take over as manager next term.

De Bruyne's absence ran alongside that sluggish spell, and there was little coincidence in City's immediate improvement on his return.

City can ill afford to rest their Champions League qualification hopes on winning Europe's elite tournament, with a quarter-final showdown with Paris Saint Germain coming up.

So the importance of this resounding victory stretched far beyond purely boosting confidence - City will view their win as the catalyst to sewing up that top-four finish, especially with West Ham and Manchester United circling. 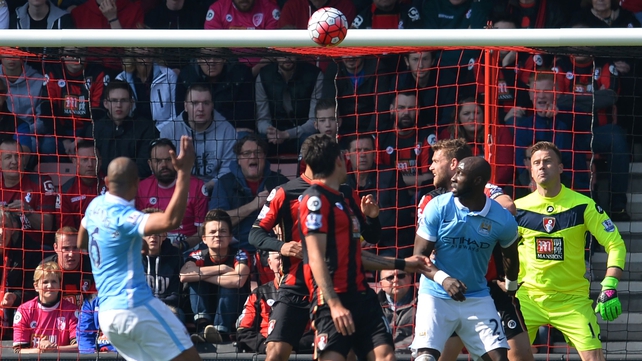 Bournemouth fired from the blocks but that spark quickly fizzled out as five minutes of dominance gave way to a quarter-hour blitz that settled the tie.

Fernando (above) fired home his first goal of the season after Bournemouth failed to clear Jesus Navas' poor corner, as City took the lead after seven minutes.

The visitors quickly doubled their advantage with the best move of the match. Charlie Daniels surrendered possession cheaply, Aguero chipped in to Silva who laid off to De Bruyne, and the Belgium forward swept home on the volley.

Cue the spring sunshine, cue the exhibition football from City. After Aguero lofted it to Silva, the next time the ball touched the ground was when it hit the back of the net.

Navas' persistence paid off when he reached an over-hit pass to keep the ball in play and stand up a cross to the far post.

Aguero did the rest, out-muscling and out-jumping the Bournemouth defence to loop a header back across goal and over the bamboozled Artur Boruc.

City took their foot off the gas after the break, doubtless eyeing Wednesday's Champions League last-eight first leg in Paris.

Pellegrini withdrew De Bruyne before the hour, and Silva just after it.

Ireland's Eunan O'Kane scuffed a shot badly wide when through for Bournemouth, and City wasted several half-chances, before Kolarov fired an unstoppable fourth for the final word. 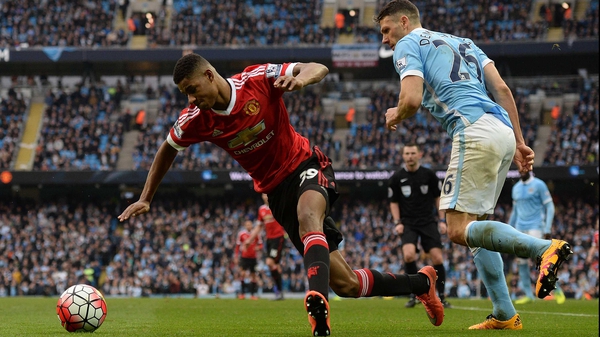