Derry City left Oriel Park with something to show for their efforts for the first time since 2013 as Barry Macnamee’s goal secured the Candsytripes a 1-1 draw in an SSE Airtricity League Premier Division game where both sides finished with ten men.

Things looked ominous for Kenny Shiels’ Derry side when they fell behind after just three minutes. Dane Massey’s quick free-kick on the left found Ronan Finn and he picked out David McMillan, who fired home with his left foot.

Dundalk looked to press home their advantage and Brian Gartland rose to meet a Darren Meenan corner six minutes later. However, his header hit McMillan who just couldn’t adjust his feet to divert the ball goalwards.

Daryl Horgan then cut in from the left to leave Harry Monaghan in his wake but his right-footed effort crept just wide of Doherty’s post. 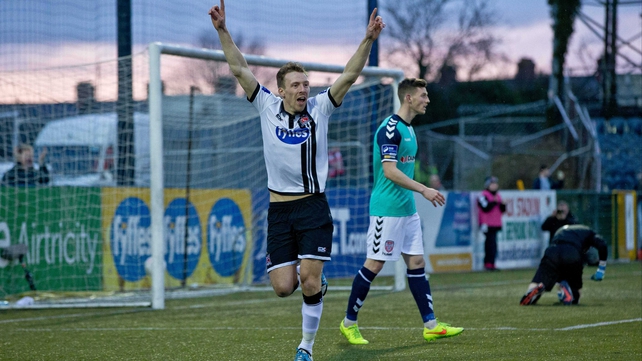 City went in at the break just one goal adrift and they were given a huge boost when Chris Shields, who found his way into referee Padraigh Sutton’s notebook just five minutes earlier, saw red for taking Rory Patterson down in the 55th minute.

And the visitors stunned the home support by drawing level with their first real effort of the game in the 67th minute.

Monaghan’s defence-splitting pass sent Patterson in on the right. The striker’s effort beat Gary Rogers, only to see it come back off the post but Barry McNamee was there to slide home the loose ball.

Derry’s momentum was halted nine minutes later when Conor McCormack saw red at Oriel Park for the second time in his career by picking up another yellow card for a foul on McMillan.

Stephen Kenny sent on Ciaran Kilduff and Patrick McEleney in a bid to win the points and Stephen O’Donnell almost snatched the win in the 89th minute, but his flying header was saved by Doherty.