Martin O'Neill has revealed Rob Elliot suffered a "serious knee injury" which could end both his Euro 2016 dream and his hopes of helping to keep Newcastle in the Barclays Premier League.

The 29-year-old goalkeeper was hurt as he tried to keep out Miroslav Stoch's opener in the Republic of Ireland's 2-2 draw with Slovakia on Tuesday night, and now both club and country will anxiously await news of the extent of the problem.

However, Ireland boss O'Neill was downcast as he revealed the early signs were not promising, with the indications that Elliot has suffered ligament damage.

He said: "He's not great. He's got a serious knee injury. It's a real disappointment and obviously a dampener on the evening, particularly when he is getting his career together.

"He was going really well at Newcastle and looking forward to the game and coming here into the squad with a lot of confidence.

"I have just spoken to the doctor and he's not happy."

Asked if Elliot's season could be over, O'Neill added: "It might be too early for me to be making those assumptions. I was asking the doctor before I came out.

Before the game, former regular Ireland goalkeeper Shay Given said that he was hopeful of getting a run in the Stoke team due to the absence of Jack Butland, who was injured playing for England at the weekend.

"I feel like I could play all the time," said Given, 39, who also just had a spell on the sidelines. "I would love to play on Saturday against Swansea."

Randolph, who is not a Premier League regular with West Ham but is first choice for the Hammers' cup ties, started the last three qualifying games, while Millwall's David Forde, also second choice with his club, is in the squad.

Lone striker Shane Long, who won two penalties and scored one, was taken off at half-time and had ice on his knee after taking a knock close to the end of the first period.

We'd like to echo all the get well soon messages we've received and wish Rob Elliot a speedy recovery. #COYBIG pic.twitter.com/TV5XWeCCHh 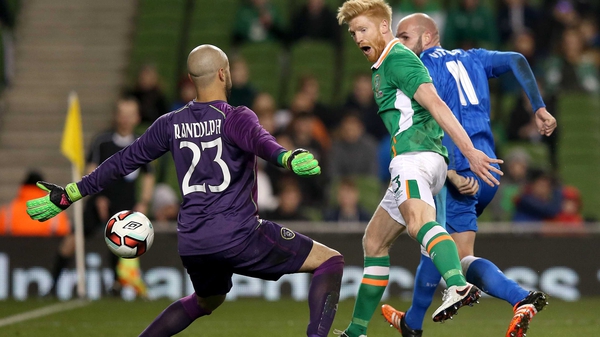 As it happened: Republic of Ireland v Slovakia