Republic of Ireland skipper Robbie Keane is out of Tuesday night's friendly against Slovakia as he grows increasingly concerned over a niggling knee injury.

The 35-year-old limped away from the Aviva Stadium on Friday evening after watching his team-mates secure a 1-0 victory over fellow Euro 2016 finalists Switzerland and while manager Martin O'Neill is confident there is no lasting damage, he admitted Keane is looking for answers.

O'Neill said: "Robbie is just a wee bit concerned about the injury now. It's something he thought was a kick for a start, he thought it would clear up in a couple of days. He has just felt it's sore and it's something he definitely wants looked at now, either here or going back.

"He will miss Tuesday's game definitely now. I am hoping that's not a major concern at the moment and I genuinely don't think it is, so I don't want to start a bit of scaremongering."

Keane was not the only Ireland striker seeking medical attention on Friday evening, with Colorado Rapids frontman Kevin Doyle also set to miss the Slovakia game with a deep gash on his leg.

O'Neill was otherwise a reasonably happy man after seeing Ireland stretch their run this season to one defeat in seven games.

Ciaran Clark's second-minute header, which was assisted able by central defensive partner Shane Duffy - playing his first senior international for almost two years - was enough to hand them victory on a night when the manager ran the rule over a series of fringe players.

They might have won more comfortably had Shane Long's first-half header not come back off the underside of the crossbar, although keeper Darren Randolph had to make an important save from Granit Xhaka's deflected shot and substitute Shani Tarashaj fired agonisingly wide as time ran down.

O'Neill said: "I think we probably lacked a little bit of cohesion, but it was nice to keep the momentum going against what I thought was a very fine Swiss side, I must admit, who kept possession well and after we scored the early goal, certainly put us under pressure.

"There are things we can definitely improve, I think there's no question about that. I just thought we could maybe have a wee bit more confidence in ourselves when we have the ball, that's all.

"But it was just nice to win the game and keep that sort of momentum going. One or two players, I thought, played very well, but I just wanted us to maybe be on the front foot a wee bit more."

Switzerland boss Vladimir Petkovic was less than impressed with his side's efforts.

He said: "Congratulations to the Irish team for the win. They deserved to win this game. We knew beforehand that one single moment could be decisive in this game and we were really unlucky that we had that moment after just 100 seconds.

"We had quite some difficulty in finding our rhythm. We improved, but still the first ball was not precise enough.

"We will look forward to the next game. We have to improve a lot and show better character on the pitch as well." 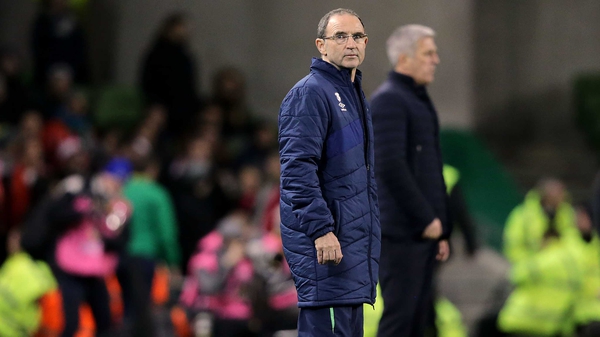