Republic of Ireland striker Kevin Doyle has confirmed he suffered no lasting damage after undergoing surgery to repair a horrific gash to his leg.

The 32-year-old Colorado Rapids striker was carried from the pitch on a stretcher during Friday night's 1-0 friendly victory over Switzerland after going down in agony following a challenge by Norwich defender Timm Klose.

Doyle later tweeted a graphic photograph of the injury as he prepared to undergo a procedure to clean and stitch the wound at Dublin's Mater Hospital.

But on Saturday morning he revealed he will be able to resume start running once again within a matter of weeks.

Doyle tweeted: "Thanks to the plastic surgeons at the Mater Hospital, leg looks brand new, no serious damage, back jogging in a few weeks."

The injury could hardly have come at a worse time for former Cork City striker, who was starting his first game for Ireland since a 2-0 friendly victory over Oman in September 2014.

He now has 62 caps and has scored 14 goals for his country, but will miss Tuesday night's friendly against Slovakia and another chance to stake a claim for a place in Martin O'Neill's squad for the Euro 2016 finals.

O'Neill also confirmed that skipper Robbie Keane will miss the Slovakia game with a knee injury.

"Thanks to the plastic surgeons at the Mater Hospital, leg looks brand new, no serious damage, back jogging in a few weeks." - Kevin Doyle

Seamus Coleman skippered the side at the Aviva Stadium, on a night when Ireland's solid rearguard action was the main talking point.

Everton full-back Coleman knows all about Shane Duffy, who impressed alongside Ciaran Clark at the heart of the defence, and the Donegal man took great satisfaction from Ireland's fourth home win on the bounce without conceding.

“When the gaffer said I was captain I was obviously very proud," he told RTÉ Sport. "Once that settled it was about getting a win and keeping a clean sheet. It was backs- to-the-wall at time but I never really thought they looked like scoring. It was a good job defensively.

“I played with Shane at Everton and he’s gone out at Blackburn to get games and I think he’s having a very good season. He did well, very calm, good in the air. Clarky popped up with the goal so it was a good night for the centre-halves.

“It’s been very positive for the lads. It’s important for the lads who are doing well at club level to get rewarded." 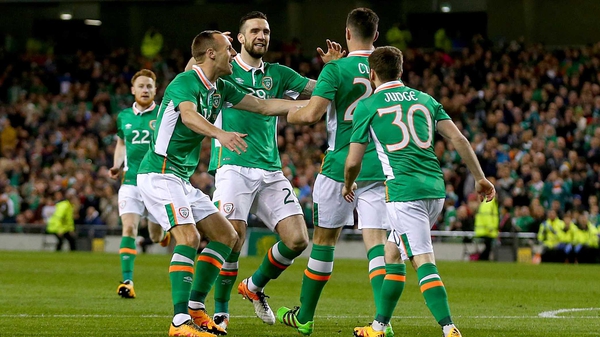