Republic of Ireland midfielder Stephen Quinn hopes that the hard-fought win over Switzerland will help his cause for inclusion in Martin O’Neill’s European Championship squad.

The Reading midfielder got his chance to shine in midfield as Martin O’Neill’s side defeated Switzerland 1-0 at the Aviva Stadium, with defender Ciaran Clark scoring the only goal of an entertaining encounter.

"We tried to get on the ball but it was difficult."

The 29-year-old, who had missed the last two internationals through injury, admitted he found the going tough against a high-pressing Swiss outfit, but was satisfied with the result as Ireland secured their fourth successive home victory.

“It was very high tempo friendly,” he told RTE Sport. “They came and closed us down with a high press. We tried to get on the ball but it was difficult."

“They had a lot of possession but I thought we defended well. We could have had three goals, but in the end it was a hard night’s work and job done.”

With attention turning to who will make the final 23-man squad for the championships in France, Quinn is hopeful he will get more opportunities to stake his claim for a midfield berth.

“All you have to do is try your best and see what the manager thinks. Hopefully I can kick on and get fit and work my way into the manager’s thoughts.” 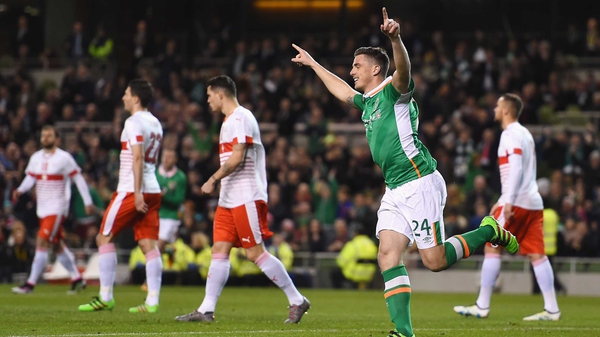 Clarke: Keeping clean sheet was as good as scoring a goal