RTÉ soccer analyst Liam Brady has described Johan Cruyff as "a visionary" after the former Dutch international lost his battle with lung cancer at the age of 68.

Tributes poured in for the former Ajax and Barcelona maverick, who also managed both clubs, after the news of his passing on Thursday.

Brady, speaking to RTÉ Radio 1's News at One, said the Dutchman broke the mould, and introduced a way of playing the game that continues to resonate powerfully today.

“There’s not many players have a skill named after them," said Brady in reference to the famous 'Cruyff turn'. "We hadn’t seen it before, facing one way and in an instant he was the other way and gone.

"He introduced skills that we hadn’t seen and he was so, so fast. People spoke about Pele, but when Pele ended his career, really, in 1970, Cruyff stepped into his shoes and dominated football for the best part of a decade.

“He had speed, could score goals, had football intelligence at a huge level. If he was playing now he’d be up there with Messi and Ronaldo, if not better.

“He introduced a style of play to Barcelona that lives on today. Pep Guardiola, who’s probably known as the best manager around at the moment, he was one of his players. Cruyff introduced this way of playing football where Barcelona had to entertain their fans.

"If he was playing now he’d be up there with Messi and Ronaldo, if not better."

"If the opposition scored three their job was to score four. He really believed football was entertainment for the fans and he wanted it to be played that way."

Cruyff's success as a player continued into management. He took the reins at Ajax from 1985 to 1988, before heading to the Nou Camp, winning the European Cup in 1992 and four league titles among a raft of trophies.

However it was his grace and balance as a footballer that truly captured the imagination, with Brady recalling the night their paths crossed in London.

"I played in George Armstrong’s testimonial against Barcelona in the mid 70s and I had the pleasure of playing against Cruyff. To see him up close was fantastic. They beat us 3-1 at Highbury, and he was involved in everything they did offensively. 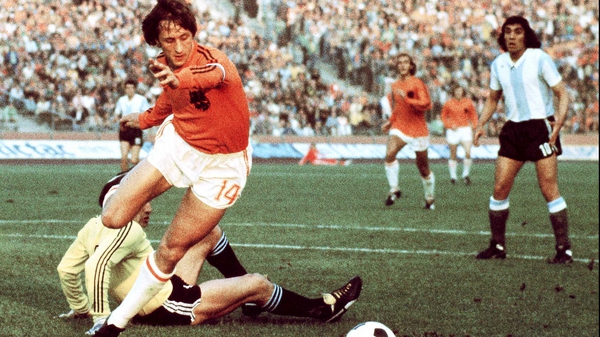